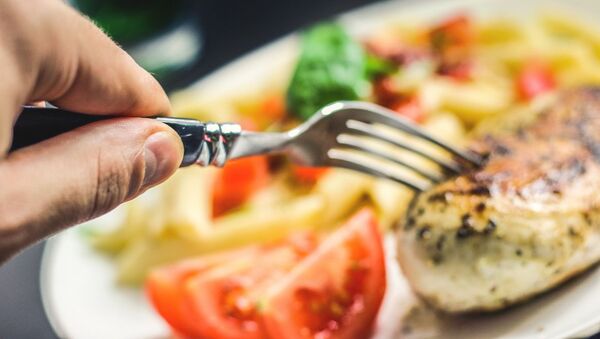 New Delhi (Sputnik): A hotel in India’s Madurai city has been compelled to apologise after having controversially promoted a non-vegetarian dish named after a Hindu caste known for its highly religious and purely vegetarian way of life.

The hotel recently released a poster to advertise their special dish called “Kumbakonam Iyer Chicken". The advertisements, however, stoked a huge controversy, evoking a strong reaction among the Brahmins of the “Iyer” community, along with other Hindu organisations in the state.

It even led to the launch of a massive protest against the hotel.

​To lodge their objection against the dish’s name, representatives of the Iyer Brahmin community reportedly met the hotel administration, subsequent to which the hotel issued an unconditional apology.

"After Brahmin community representatives met us and raised serious objection to the name of Kumbakonam Iyer Chicken, we apologised for it. We will remove the ads for it from social media and are also doing away with the name", the hotel authorities were quoted as saying by the daily Indian Express’ web portal.

However, despite the apology, a section of netizens seemed furious at the hotel’s advertisement and criticised the eatery for disrespecting the Brahmin community and the Hindu religion.

A Madurai restaurant in its menu card had an item
“ Kumbakonam Iyer Chicken”
Another instance of insulting and abusing TN Brahmins. No limit to Brahmin hatred in TN.

why is that always hindu religion is being targetted. will they have the guts to name in the name of prophet or jesus christ.sadly for past 600 years hindu religion has been target by other religions.

Can understand malabari chicken,chettinad chicken, But from where does an 'Iyer' come in a chicken? https://t.co/or1qVwBoan

The issue of food being linked with religion recently erupted in the country with an incident where a man refused to take his delivery from food aggregator platform Zomato, because the delivery boy was a Muslim.

Subsequently, the food delivery service came out with a series of tweets about the incident, stating that they do not believe in religious discrimination.

However, many netizens questioned Zomato for what they termed a “discriminatory” practice by it, because they cater to the religious sensitivity of some other sects.