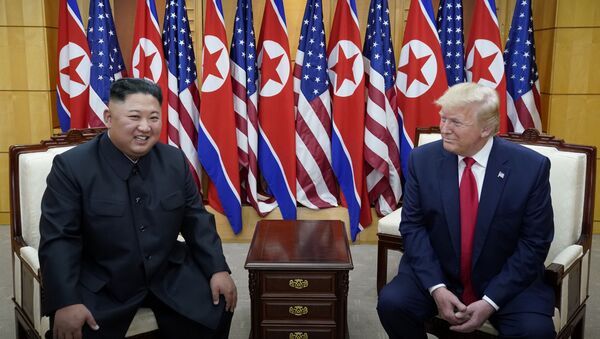 According to South Korean news agency Yonhap, the US official met with a North Korean official to deliver photographs documenting the June 20 meeting between US President Donald Trump and North Korean leader Kim Jong Un. During the delivery, the North Korean official expressed the country’s willingness to renew denuclearization talks in the near future. However, a date on when negotiations would resume was not provided.

During a meeting at the DMZ last month, the two heads of state agreed to energize their deadlocked denuclearization talks by engaging in working-level contacts.

"We hope that the working-level discussions will begin in a couple of weeks. The North Koreans have to go fill the promise that Chairman Kim made,” US Secretary of State Mike Pompeo told IHeartMedia in a radio interview last week.

“He promised that he would denuclearize his country.  He did so publicly in a written document; he said so to President Trump. He has told me that half a dozen times personally. They have to make a decision that they’re prepared to go execute that.”

This week, Pompeo and North Korean Foreign Minister Ri Yong Ho were expected to meet at the Association of Southeast Asian Nations Regional Forum in Bangkok, Thailand. However, Ri canceled his trip to the conference, according to a diplomatic source, multiple reports state.

The latest development regarding resumed talks came ahead of reports that North Korea fired "multiple unidentified projectiles” early Wednesday. Officials told Yonhap that the missiles were reportedly fired eastward from South Hamgyong Province on the country's east coast. It’s unclear how the latest deployment will affect future talks with the US.

North Korea had previously test fired two short-range ballistic missiles into the Sea of Japan last week. Shortly thereafter, North Korean state-run media reported that the launches were tests of a new tactical guided weapon and were to serve as a warning to South Korea against boosting its military.

000000
Popular comments
North Korea doesn't have to denuclearize s**t. Mofo americans should piss off back to Japan where they can crash more planes in Osaka.