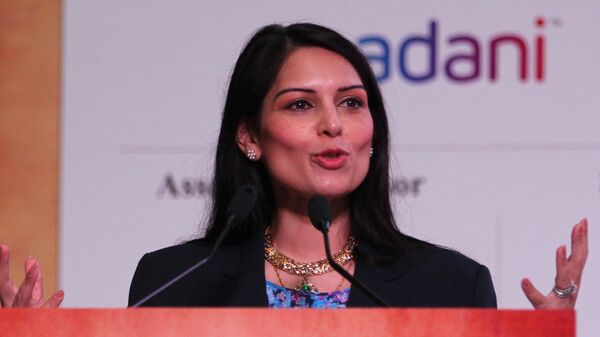 Kit Klarenberg
All materials
In his first act as Prime Minister, Boris Johnson has undertaken a major cabinet reshuffle, sacking over half of Theresa May’s ministers, with those who remain typically having been moved to other posts.

In some cases, the new appointees are extremely controversial - none more so perhaps than new Home Secretary Priti Patel, whose predecessor Sajid David is now Chancellor of the Exchequer.

A former British American Tobacco lobbyist and staunch supporter of the death penalty who suggested using the threat of food shortages as leverage in negotiations with Ireland over the ‘backstop’, Patel was forced to resign International Development Secretary in November 2017 after it was revealed she’d had 12 secret meetings with Israeli government officials in August that year without apprising her own department, the Foreign and Commonwealth Office or the Prime Minister, a serious breach of the ministerial code.

​Patel initially claimed she’d been in Israel “on a family holiday” she herself paid for, but subsequently admitted the meetings were “arranged by” Israel lobbyist Stuart Polak, a member of Britain’s unelected upper chamber, the House of Lords, and key figure in the Conservative Friends of Israel group. She was accused by government insiders of trying to win favour with wealthy pro-Israeli Conservative donors, seeking funding for a potential future leadership campaign.

After returning from her illicit jaunt, Patel is reported to have asked fellow officials whether a portion of the UK’s aid budget could be provided to the Israeli army’s ‘humanitarian operations’ in the Golan Heights, part of southern Syria occupied by Israel during the Six Day War in 1967 and formally annexed in 1981.

Whitehall’s refusal to grant aid to Israeli projects in the Golan Heights stems from the UK official not recognising the annexation, a long-standing policy of which Patel may have been entirely unaware.

Conversely, it seems like Patel was aware some of the Israeli army’s humanitarian operations in the area include military field hospitals which are used to treat jihadists wounded in the Syrian war, including members of factions linked to al-Qaeda - despite visiting such a medical facility during one of her secret trips to Israel.

While almost entirely ignored by the mainstream media, UN peacekeeping forces stationed in the Golan Heights have witnessed first-hand injured Jabhat al-Nusra fighters being treated by Israeli military doctors, then being sent back into the Golan to fight Hezbollah and the Syrian Arab Army. Documentary filmmakers have even captured video evidence of the practice.

“It’s always useful to deal with your enemies in a humane way. When you have people who are wounded, considerations of whether to take them in are not simply whether it’s politically useful…I didn’t say there was no tactical [consideration]. I don’t think there’s going to be blowback…Al Qaeda to the best of my recollection hasn’t attacked Israel,” Efraim Halevy, former chief of Israeli intelligence agency Mossad, said in May 2016.

On the day of her resignation, Israeli newspaper Haaretz reported Patel “visited an Israeli military field hospital” in Golan which “assisted both wounded civilians as well as wounded rebel Syrian fighters, some of whom have been accused of being members of jihadi groups” fighting the Assad forces. The visit - along with meetings with Yuval Rotem, Israeli foreign ministry director general, in New York, and Gilad Erdan, Minister of Public Security, Strategic Affairs and Information, in London - was nonetheless not disclosed in the list of meetings she released alongside an official apology prior to her unceremonious departure.

The role of Home Secretary is a vital one, inferring ultimate responsibility for protecting the UK’s national security, combating terrorism, with the office holder the effective head of the country’s domestic and international security services. One can only hope Patel has at the very least brushed up on the Ministerial Code during her period in the backbench wilderness.