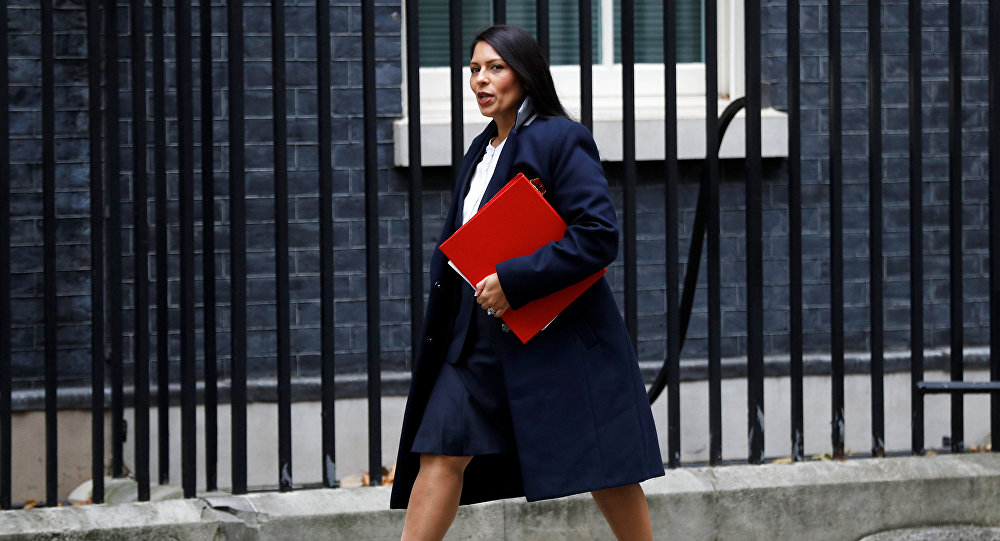 Britain's international development secretary Priti Patel looks to be facing the sack from Theresa May's cabinet after it emerged she failed to disclose information about two further meetings with Israeli officials.

UK prime minister Theresa May is expected to axe her international development secretary Priti Patel within a matter of hours on Wednesday, November 8, after it was revealed she held two further undisclosed meetings with senior Israeli officials in September — but appears to again have been candid about them.

Having already reprimanded Patel on Monday, November 6, over a series of unauthorized meetings with Israeli figures, including prime minister Benjamin Netanyahu in August, while on a family holiday, the British premier has now ordered her back from an official trip to Africa for another showdown at Downing Street — at which she is expected to lose her job.

So I am hearing that Priti Patel is likely to be sacked within hours. That would be two cabinet ministers gone in a week.

​The UK international secretary flew to Nairobi, Kenya on Tuesday, November 7, just 24 hours after she was forced to apologize for breaking strict ministerial rules by attending official meetings in Israel without informing the foreign office or British diplomats of her intentions to hold 12 meetings which were not sanctioned.

Patel was scheduled to fly from Nairobi to Entebbe in Uganda on Wednesday, November 8, but did not board the aircraft, leaving fellow cabinet minister and UK international trade secretary, Liam Fox, to make the journey.

Instead it is understood she boarded the Nairobi to London flight having been summoned immediately by Theresa May.

Priti Patel — often considered as a future Tory leader — had been asked by the prime minister on Monday, November 6, to give details surrounding a string of undisclosed meetings.

During this meeting, Patel appears to have omitted to tell May that she discussed funneling UK tax-payers' money to the Israeli army to treat wounded Syrian refugees in the Golan Heights region.

Priti Patel will be ages in the something-to-declare lane when she lands back in Blighty. Visited Israeli army in occupied Golan Heights as well as undeclared London & New York meetings. On top of 12 others, obvs

Now it has emerged that she also conducted two further meetings the following month without government officials being present, although Lord Polak, honorary president of the Conservative Friends of Israel did attend.

It is unclear whether the British prime minister has spoken to Patel since this further revelation.

She met Israeli public security minister Gilad Erdan in Westminster on Thursday, September 7, who later tweeted about their meeting including posting a photograph of them.

Wonderful meeting my friend Sec. of State Priti @Patel4witham, a woman of great courage and leadership. We are taking concrete action 1/2 pic.twitter.com/JCXlRhukqW

​Sources suggest that this meeting had been declined on her behalf by her department officials, but unbeknownst to them, it was then fixed up by her constituency office. None of her officials attended it.

Despite the attention — rightly — on Priti Patel, we mustn’t also forget Boris Johnson’s catastrophic error in the Iran case, his pathetic qualified apology to a mother in tears at prospect of not seeing her child for more years, and his risk to diplomacy

​As details of her earlier series of meetings in August involving Israeli officials became known, Patel initially attempted to cover up them up, insisting that foreign secretary Boris Johnson knew of the trip in advance — but she was later forced to detract this.

A cabinet minister voiced surprise on Tuesday, November 7, that she had managed to cling on to her job, saying:

"Failure to disclose, caught lying, then admitting she commissioned policy… is a breach of propriety and proper practice. This was a full-visit program not a casual add-on to a holiday."

The furore around her unofficial trip to Israel has refused to die down, however, despite No.10 attempting to draw a line under the matter by insisting the ministerial code would be reviewed to iron out any ambiguity.

The affair was later raised in the Commons when an urgent question was tabled, but Patel failed to show as she was flying to Africa on government business. Her decision not to attend parliament allowed opposition parties to vent their anger over the prime minister's handling of the case.

News surrounding the scale of the meetings prompted serious questions to be raised over the secrecy of relations between both the British and Israel governments, according to a UK-Palestine official.

"The most alarming and indeed sickening revelation was that Patel hoped to divert funds from the UK government aid budget to the Israeli army, an army chronically accused of war crimes and crimes against humanity, for supposedly humanitarian work," Mr Napier added.

His comments were later echoed by Labour peer Charles Falconer, who insisted the Patel must "definitely" be sacked.

"She should not be colluding with a foreign government…It means she's not part of a collective government trying to do the best for Britain… It's appalling," Falconer said.