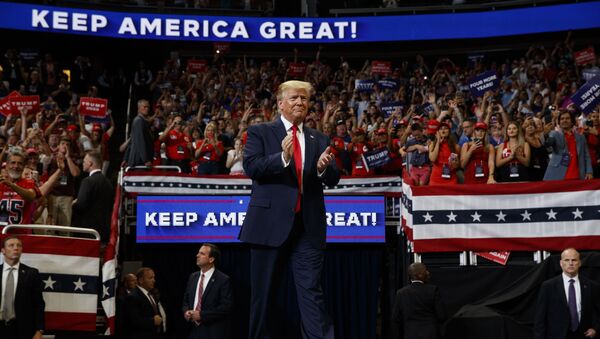 On Tuesday, Trump officially launched his re-election campaign in Orlando, Florida ahead of the 2020 US elections. Earlier, he tweeted that polls show that he is ahead of the presidential contenders in all seventeen key “swing states”.

A non-profit news organisation has claimed that California residents pumped more donations into the 2020 Trump re-election campaign than to most Democratic hopefuls. California is believed to be a self-styled “resistance” state earlier filing more than 50 suits against the US president.

According to finance campaign data processed by the organisation CalMatter, a whopping $3.2 million has been donated to the Trump campaign in California since the beginning of 2019.

Notably, at least 92.8 percent of donations were made by those donors who contributed less than $100.

This means that Trump managed to raise more funds than Democratic primary frontrunner Joe Biden, as well as Senators Bernie Sanders and Elizabeth Warren, despite California’s support for these presidential hopefuls. In comparison, Sanders only raised a total of $2.2 million in the state.

The developments come a few days after Trump officially launched his re-election campaign at a rally of 20,000 supporters in Orlando, Florida, in the run-up to the November 2020 US presidential elections.

Announcing his official campaign slogan “Keep America Great”, Trump also lashed out at “our radical Democrat opponents” who he claimed “are driven by hatred, prejudice and rage and want to destroy you and they want to destroy our country as we know it”. He pledged that “it’s not going to happen”.

.@FoxNews Polls are always bad for me. They were against Crooked Hillary also. Something weird going on at Fox. Our polls show us leading in all 17 Swing States. For the record, I didn’t spend 30 hours with @abcnews, but rather a tiny fraction of that. More Fake News @BretBaier

On Monday, the US president tweeted that he is ahead of 2020 presidential contenders in seventeen key "swing states".