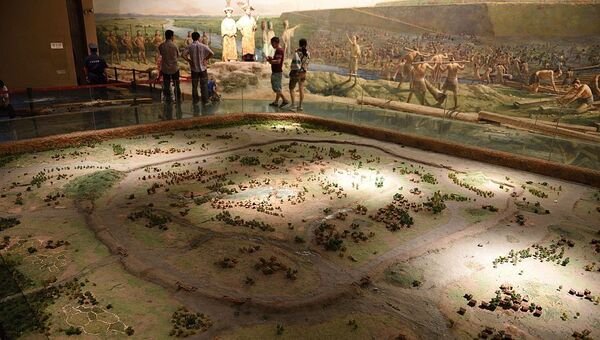 © Wikipedia / Siyuwj
Subscribe
The rain on Tuesday did not stop visitors' passion to see the glamour of the newly opened Archaeological Ruins of Liangzhu Ancient City in Hangzhou, East China's Zhejiang Province.

After being listed as a world heritage by the United Nations Educational, Scientific and Cultural Organization (UNESCO) on Saturday, the ruins, a testimony to the 5,000-year-old Chinese civilization, attracted attention at home and abroad.

While visiting the ruins, the Global Times reporter found that most of the exhibits were from the sites where the Liangzhu Culture relics were found.

Most of the unearthed relics are kept in Liangzhu Museum, about six kilometers away from the ruins.

Egrets, ducks and other water birds can also be seen in the paddy field alongside the road of the ruins.

The ruins cover 3.66 square kilometers and visitors can take a shuttle bus to different sites in the park.

Michelle Shearer, a visitor from Australia who is working in Hangzhou, told the Global Times on Tuesday that she decided to visit the ruins when she knew it was listed as a world heritage.

"It is really a good place for people to learn history and culture," she said.

The ruins officially opened to the public on Sunday. But before August 1, tourists can visit the site for free.

Tickets ranging from 20 yuan ($2.90) to 80 yuan are required after that date, employees at the ruins told the Global Times.

Yu Tiefan, deputy manager of the marketing department of the Archaeological Ruins, told the Global Times that the park has a 3,000-ticket limit per day and tickets prior to July 16 have been sold out.

Liangzhu Ancient City represents an early state with urban civilization in the area around Taihu Lake in the lower reaches of the Yangtze River in the late Neolithic China 5,000 years ago. The ruins have been well preserved.

"It is considered a supreme achievement of the prehistoric rice-cultivating civilization of China and East Asia over 5,000 years ago and an outstanding example of early urban civilization," said a report by the International Council on Monuments and Sites (ICOMOS).

Chen Shaofeng, deputy president of the Institute for Cultural Industries under Peking University, told the Global Times that Liangzhu Culture not only represents the ancient cultures around the Taihu Lake area, but also shows the fusion of different cultures.

Including the ruins has brought the total number of World Heritage sites in China to 55, the most in the world.

Analysts noted that aside from promoting civilization exchanges, China could also share its experience in heritage protection through the event, such as how to combine tourism with cultural preservation in a sustainable manner.

While working as the Party chief of Zhejiang Province, President Xi Jinping visited Liangzhu twice. He said the site, a testimony to the existence of China's 5,000-year-long civilization, must be protected well, China Central Television (CCTV) reported Sunday.

During a visit to the site in 2003, Xi was told that six stone mines in the neighboring city of Huzhou had damaged the cultural site but were not shut down. Xi visited Huzhou the next day. The six mines were soon closed, CCTV reported.