Riddle Me This: Historian Claims Secret Chamber is Hidden Behind Sphinx's 'Back Door' 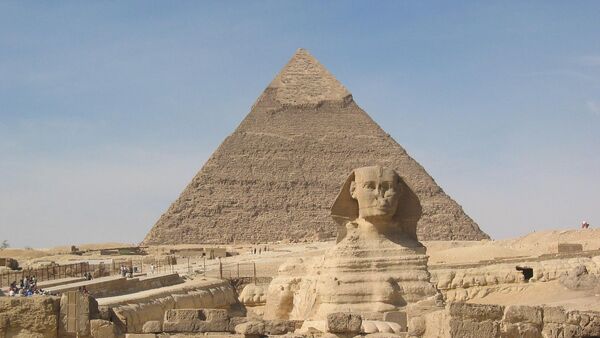 The historian postulated that the shaft, accessible from the Sphinx’s “hind quarters”, leads to a chamber of natural origins that was “worked by man” and once served as a resting place for a body.

Historian Matt Sibson, the man behind the “Ancient Architects” YouTube channel, has recently announced yet another interesting discovery related to the famous ancient Egyptian monument known as the Great Sphinx of Giza, and the mysteries that might be lurking beneath it.

In one of his recent videos, Sibson pointed at the existence of what appears to be a burial chamber concealed underneath the Sphinx and accessible via a long vertical shaft, with the entrance located in the back of the monument where its "hip" connects with the "body".

The historian pointed out that the shaft was discovered in the 17th century by Johan Michael Vansleben, and later thoroughly explored in 1853 by Egyptologist Auguste Mariette who discovered a "rough chamber" at the bottom that looked like "natural fissure", though "there was evidence it was enlarged by the hands of man".

In 1926, however, grey cement was spilled down the shaft during restoration works, making it difficult to ascertain whether there is indeed a chamber below.

"Despite a cement spill, I’m convinced that the shaft in the back of the Sphinx does lead to a chamber due to a number of eyewitness accounts", Sibson remarked. "Natural, yes, but worked by man and once included a body, most likely".

Earlier, the historian also postulated that the key to discovering what’s hidden beneath the Sphinx may lie in an ancient stele that was removed from the monument in the 19th century.