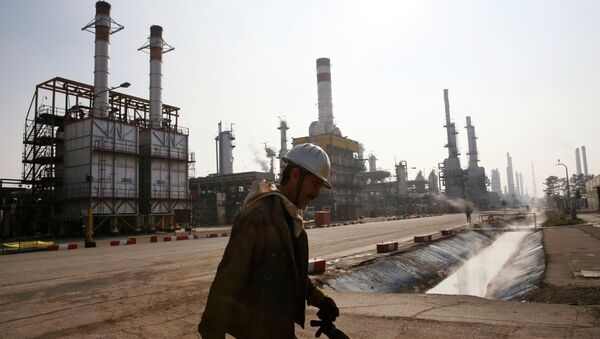 Last week, China, a major importer of Iranian oil, announced that it "rejects unilateral sanctions" and would "not support" US efforts to bring Iran's oil exports "to zero."

Officials at the State Department are 'seriously considering' allowing China to continue its imports of Iranian crude oil, Politico has reported, citing three US officials said to be familiar with the conversations.

The officials said Trump special Iran representative Brian Hook and his team have been discussing the revival of a 2012 Obama-era sanctions loophole which would allow China to continue oil imports from the country for payment in kind deals, including payments for outstanding debts to Chinese energy giant Sinopec for its investments in Iranian oil fields.

According to one source, the State Department has already contacted Sinopec with the waiver offer.

The alternative, according to Politico, would be to allow Beijing to "openly defy US sanctions," with China's ports reportedly already taking in at least two major shipments of Iranian oil in recent days despite US sanctions threats.

Last week, amid reports that China was defying US Iran sanctions policy, Chinese Foreign Ministry Department of Arms Control director Fu Cong stressed that energy security was "very important" for Beijing, and that China would "not support US policy on bringing Iran's oil exports to zero."

On Friday, Hook maintained there were "no oil waivers in place" at the moment, and promised that the US would continue to slap secondary sanctions on any country or company making "any illicit purchases of Iranian crude oil."

The Trump administration has already received flak for its apparent inability or unwillingness to enforce sanctions, with Florida Republican Senator Marco Rubio asking why, despite of elimination of the waivers, China has continued to receive "massive oil cargo from Iran."

The Trump administration scrapped the sanctions waivers on Iranian oil in May, with eight major importers including China, India, and Turkey threatened with penalties if they continued buying oil from the country. The waivers were issued last year, after President Trump pulled the US out of the 2015 Iran nuclear deal and placed tough banking, energy and other restrictions on the country.

Before the waivers expired, China depended on Iran for about 20 percent of its imported oil, buying an estimated 500,000 barrels of Iranian crude before the restrictions stepped into force.

Jarrett Blanc, a former State Department official coordinating State Department policy on the Iran nuclear deal under the Obama administration, said he was not surprised that the White House was looking for a way to legitimize China's flaunting of sanctions. "There's not that much they can do about it if China says, 'Screw you'," he said.