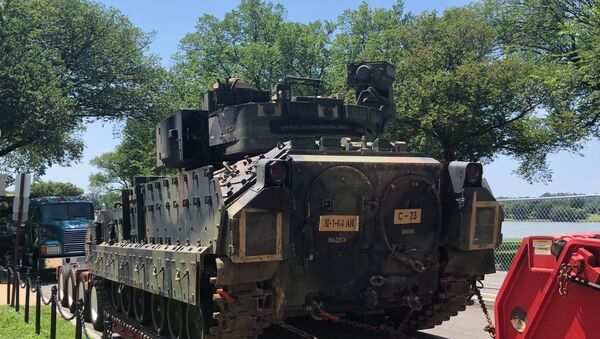 © Sputnik
Subscribe
Earlier this week, President Donald Trump boasted that the new parade to display American military might in the capital during Thursday's Independence Day celebrations would be a "show of a lifetime" which would include "incredible flyovers" by "the best fighter jets in the world" and show off "brand new Abrams tanks".

The Pentagon is not concerned about the worn-out appearance of the armoured vehicles brought to the US capital for Independence Day celebrations, a spokesperson has said.

"It was decided to present these vehicles. They were cleaned before being brought to the National Mall," the spokesperson said, adding that the White House had asked specifically for used vehicles instead of new ones.

Earlier, two Bradley armoured fighting vehicles were spotted on trailers parked near the Lincoln Memorial, with footage showing dents, peeling paint and rust on the vehicles' bodies, and their 25-mm cannon barrels removed.

2 Bradley Fighting Vehicles are parked near the Lincoln Memorial in Washington DC ahead of the very first #SaluteToAmerica event on #July4 . Abrams tanks will arrive at the heart of the US capital later in the day to take part in Trump’s controversial military parade pic.twitter.com/dwWRiC0wu9

Two Abrams tanks, an armoured Humvee and an M88 recovery and repair vehicle will also be on display during the grand event, dubbed the 'Salute to America', with officials saying they would not be paraded along city streets to avoid damaging the pavement.

Some tanks and other Army vehicles sit on a DC train track in advance of Pres Trump's "Salute to America" event at the Lincoln Memorial on the Fourth of July. But won't be paraded to spare damage to DC street pavement. pic.twitter.com/HqETLbrKNX

In addition to the ground equipment, a B-2 stealth bomber, F-22 fighter jets, Marine MV-22 Ospreys, Navy F/A-18Es and Navy F-35C joint strike fighters will make a flyover during the parade, with the new VH-92 Marine One helicopter expected to make its first public appearance.

Trump announced plans to hold the military parade, which isn't traditional for Russia, earlier this year, promising that the "Salute to America" festivities at the Lincoln Memorial would be "one of the biggest gatherings in the history of Washington, DC."

Earlier, media reported that several agencies including the National Parks Service had diverted several million dollars to fund the event.

President Trump first professed an interest in holding a military parade in the US capital in 2017, with the idea said to have come to him after French President Emmanuel Macron invited him to be a guest of honour for France's Bastille Day celebrations that year. The Trump administration had initially hoped to hold a parade last July 4, and then on Veterans Day on November 11, but was blocked from doing so amid financial constraints and a squabble with city authorities over funding and permits.

The last time Washington, DC hosted a military parade of a comparable scale was on 8 June 1991, with thousands of troops, dozens of military vehicles and multiple aircraft taking part in the "National Victory Celebration" dedicated to the US victory over Iraq in the Gulf War. The parade cost $12 mln, the equivalent of about $22.5 mln today when adjusted for inflation. The cost of Thursday's event has yet to be reported, although the cancelled November Parade was scuttled amid an estimated price tag of $92 million.

Erik Trete
4 July 2019, 14:56 GMT3
000000
It wouldn’t surprise me if a false flag event happens while Trump is speaking at the Lincoln Memorial. I’m thinking something is going to happen- like the Maidan revolution that occurred in Kiev in 2014 while Russia was hosting the Winter Olympics.