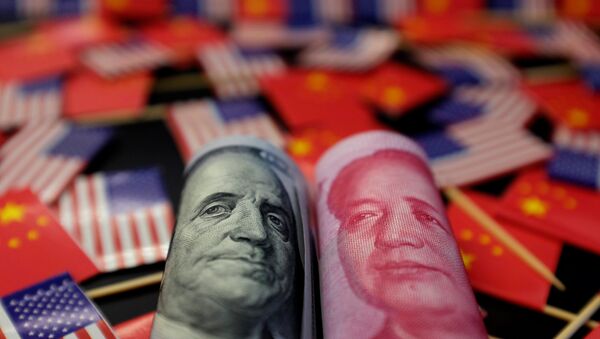 Prior to the presser, US President Donald Trump met with his Chinese counterpart Xi Jinping on the sidelines of the G20 summit and expressed readiness to reach a mutually acceptable "historic" trade agreement.

US President Donald Trump announced Saturday that the US won't be removing trade tariffs on Chinese goods for now. The US president, however, noted that he and his Chinese counterpart Xi Jinping have agreed to resume trade talks.

"We will be continuing to negotiate and I promised that at least for the time being we are not going to be lifting tariffs on China. We won’t be adding an additional tremendous amount of $350 billion left, which could be taxed or could be tariffed. We are not doing that. We are going to work with China on where we left off," Trump said.

During the meeting that took place earlier in the day, Trump said that he wanted to even up trade with China as relations between the two countries were "excellent", according to the president.

Xi, in turn, expressed willingness to work with Trump on the fundamental issues concerning the development of bilateral ties and promote relations based "on the coordination, cooperation and stability."

Earlier in the week, Trump warned that his "plan b" for China, if he doesn't get the deal he wants in Osaka, would be to slap additional tariffs on the country. According to the US president, the existing tariffs have already sent China's economy "down the tubes," and Beijing is far more eager to secure a trade deal than Washington.

The US and China plunged into an escalating tit-for-tat tariff spat in mid-2018 when the Trump administration slapped 25 per cent tariffs on $50 billion worth of Chinese goods. Since then, the economic powers have hit one another with several more rounds of restrictions, with Trump recently threatening to put tariffs on the remaining $300 billion of Chinese goods which are not taxed on entry to the United States.