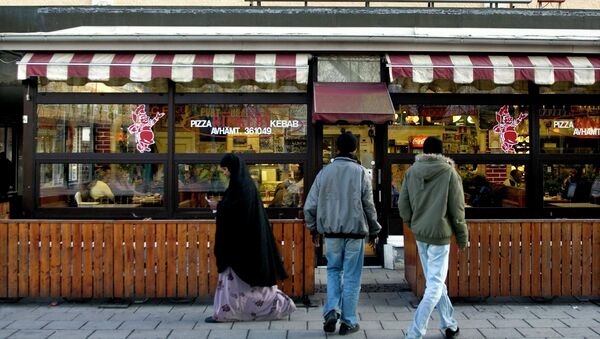 While Sweden's population remained almost exclusively Swedish for most of the 20th century, the share of immigrants and their descendants has quickly soared to about a third of roughly 10 million.

In a matter of a single generation, Sweden's population has gone from being one of the most racially homogeneous in the West to one of the most heterogeneous, researcher Tobias Hübinette, an associate professor at Karlstad University, wrote on his blog.

While Swedish left-wing magazine Expo, self-described as “anti-racist”, recently claimed that Swedes becoming a minority in their own country was a dangerous myth, allegedly peddled by “right-wing extremists” and “anti-Muslim activists”, Expo's own founder and former research chief Hübinette maintained that Sweden has indeed undergone a record population shift.

Among others things, Hübinette pointed out that less than 1 percent of Sweden's population had their roots in Africa, Asia or South America as of 1980.

“Today, over one-third or 33 percent of all residents have some form of foreign background”, Hübinette wrote, stressing that at least 20 percent of the country's population cannot pass as “white Swedes”.

According to Hübinette, it is a fact that this demographic change is largely due extensive non-Nordic and overseas immigration that took off after the end of the Cold War.

Hübinette also emphasises that many of the immigrants are young, which signals that their share of the population may increase further. According to his figures, 40 percent of all inhabitants aged 0-30 years have some form of foreign background. This figure is probably what makes Swedes feel the country is less and less Swedish and increasingly heterogeneous, Hübinette said.

Tobias Hübinette concluded that Sweden was racially, culturally, religiously and linguistically homogenous until the end of the 20th century. Later, the “racial population composition” changed and “continues to be increasingly tangible with every year”.

In 1965, Sweden's long-serving Prime Minister Tage Erlander, often dubbed “the father of the nation”, said the following in a speech before the parliament about the racial riots in the United States: “We Swedes have in an infinitely luckier lot. Our country's population is homogeneous, not only in terms of the race but also in many other respects”.

While this is clearly no longer the case, there are numerous estimates predicting that ethnic Swedes will become a minority at some point in the future. In a 1994 book “Immigration: breakdown or development", researchers Ingrid Björkman, Jan Elfverson and Åke Wedin projected that ethnic Swedes would become a minority in 2056. In a later book “Exit Welfare State Sweden”, the same authors joined by social anthropologist Jonathan Friedman, noted that immigration had escalated even faster than they projected, estimating that by the middle of the century Swedes would already be a minority.

Thomas Lindh, research director at the Institute for Future Studies in Stockholm, projected in a 2005 interview that immigrants and their immediate descendants would make up half of Sweden's population as early as 2050. Third and fourth-generation immigrants and persons of mixed descent were then counted as Swedes.

As of today, the largest communities of non-Swedish descent include people from the former Yugoslavia, Syrians, Finns, Iraqis, Somalis, Iraqis, and Poles.