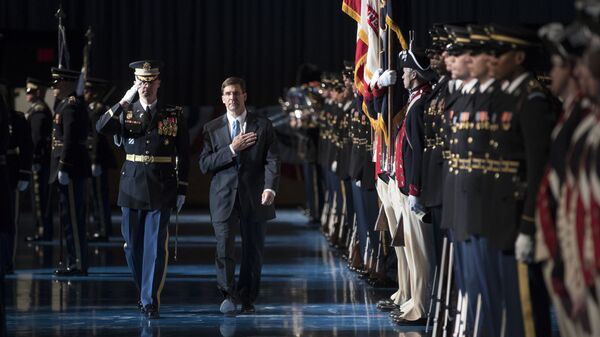 Another one bites the dust or just another day in Washington. Donald Trump's acting Defence Secretary Patrick Shanahan has now fallen out of favour and on Tuesday withdrew his nomination for the top role.

Shanahan took up the job in January after former Secretary James Mattis unexpectedly resigned, but despite his 6-month audition phase, and Trump's May announcement that he was appointing Shanahan as Secretary of Defence permanently, this never materialized.

The President took to Twitter on Tuesday to break the news.

“Acting Secretary of Defense Patrick Shanahan, who has done a wonderful job, has decided not to go forward with his confirmation process so that he can devote more time to his family”, Trump wrote.

Also revealing the name of the new acting chief of Pentagon.  “I thank Pat for his outstanding service and will be naming the Secretary of the Army, Mark Esper, to be the new Acting Secretary of Defense. I know Mark, and have no doubt he will do a fantastic job!”

....I thank Pat for his outstanding service and will be naming Secretary of the Army, Mark Esper, to be the new Acting Secretary of Defense. I know Mark, and have no doubt he will do a fantastic job!

The dumping of Patrick Shanahan by Trump may be the result of embarrassment at the expose of his violent history with his ex-wife, although the legal record reportedly shows that it was his wife who was charged with assaulting him, Dave Lindorff, investigative reporter and founder of ThisCantBeHappening.net noted.

Trump's announcement came after USA Today reported that the FBI has been examining reports of past domestic violence within Shanahan's family. One incident allegedly occurred back in 2010, and according to US media reports, both Shanahan and his ex-wife accused each other of punching each other.

A year later in November 2011, Shanahan's then-17-year-old son, William, struck his mom with a baseball bat causing her to suffer grave injuries requiring surgery. Shanahan initially defended his son, saying he acted in self-defence, but later said he didn't approve of any type of violence.

“Clearly the administration long knew about Shanahan's marital violence background since he would have gone through a major investigation of his record by the FBI for his appointment as Undersecretary. It wasn't new information to the White House”.

Lindorff pointed out that there are several other reasons why Shanahan was pushed out including the fact that “he was less than totally supportive of the erratic Commander-in-Chief Trump”.

But “his fatal error”, though, “was objecting to, and investigating, the politicization of the military when the White House tried to hide the presence of the USS John McCain during Trump's visit to Japan, when the vessel, named after the late Sen. and former Republican presidential candidate John McCain, his father, and grandfather, had its bow covered to hide its name, and its crew barred from a session with the President where their hats emblazoned with ship's name would have been seen. Shanahan ordered all ranking officers to be instructed that the military was not to be used politically like that, hugely embarrassing the President, who had minimized the incident”, the investigative reporter said.

On 1 June, the US Navy confirmed that a request was made to “minimize the visibility” of the USS John McCain during President Trump’s visit to Japan at the end of May.

After the incident, both Trump and Shanahan denied any measures to keep the ship “out of sight”.

Shanahan had no military background and was a former Boeing executive, a defence contractor, so appointing Esper as a new defence boss is a return to having the head of the Pentagon be someone with military experience, Lindorff explained.

“But Esper's military service and his bronze star, are both less than they might appear. He served in the Gulf War, which was scarcely a war, as it was primarily conducted by heavy US bombing of Saddam's Iraqi forces and ground action ended up being mostly a one-way shooting gallery because of the vast superiority of US military equipment. Esper's bronze star was awarded for commanding a unit that attacked Iraqi forces. He himself, as unit commander would have likely engaged in no actual combat. His final rank on leaving the Army was Lt. Colonel, a fairly low rank, just above major and below colonel”, the expert said, describing the new acting Secretary.

Lindorff also described Esper as a “staunch conservative Republican with no political experience and limited military experience” in a leadership role, but did note that he graduated from the prestigious military academy 'West Point'.

“Esper's political background includes serving in a staff position at the arch-conservative Heritage Foundation, as a staff person for the Republican members of the House Armed Services Committee, and as an advisor to Obama Secretary of Defence Chuck Hegel, a former Republican senator from Nebraska who was appointed by Obama to that post”, Lindorff said.

He also added that “from a point of view of policy, he can be expected to be a supporter of American militarism, and probably a dutiful backer of the president”.

Views and opinions expressed in this article are those of Dave Lindorff and do not necessarily reflect those of Sputnik.