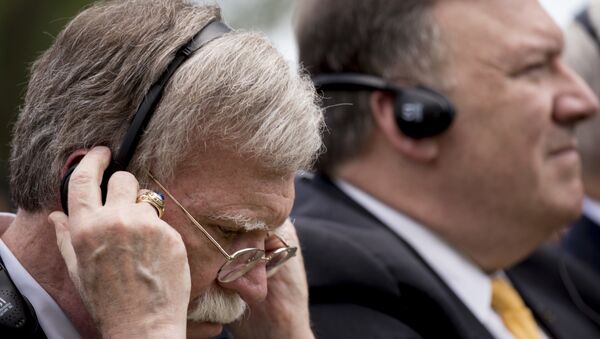 Finian Cunningham
All materials
The drama of attacks on oil and tanker assets in the Middle East can’t seem to get any more tense. The danger of war breaking out between the US and Iran is reaching a crescendo. However, if this goes down, it is a war scripted by Washington.

Nearly a week after the Trump administration blamed Iranian forces for bombing two cargo ships in the Gulf of Oman, now the US’ biggest oil company, Exxon, has reportedly  come under rocket attack in southern Iraq. That could be easily construed as a major threat to US interests. A “cause” for military “response”.

No group claimed responsibility for the latest rocket assault on Exxon’s facilities near the southern city of Basra. But it won’t be long before US officials accuse “Iranian-backed” Shia militia based in Iraq.

Set against the apprehension of war, President Donald Trump, in an exclusive interview this week with TIME magazine, reiterated that he doesn’t want a military confrontation with Iran. He downplayed he was considering a military option, which seems to contradict more belligerent recent comments by his hawkish Secretary of State Mike Pompeo.

It also contradicts reports in Israeli media that the US is in the throes of planning a “tactical assault” on Iranian sites.

Despite Trump’s seeming assurances of not wanting war, the spate of violent incidents implicating Iran is occurring like a flurry of sparks at a powder keg. It hardly matters what Trump says because the fuse for war has been laid down, and it was Trump who helped lay that fuse with his trashing of the international nuclear accord last year and re-imposition of economic sanctions.

He may not have any control over the chain reaction that could unfold, but he is complicit in at least creating the circumstances.

Iran has vehemently denied any involvement in the recent attacks on oil and shipping in the Persian Gulf region. It has even pointed to “mischievous conspiracies” by way of alerting against being set up by other malign actors. But, sooner or later, one of the relentless sparks may lead to an explosion of conflict.

Iran was similarly implicated by the Trump administration for an attack near the American embassy in Baghdad last month, as well as for allegedly sabotaging four oil tankers transiting the Gulf of Oman. 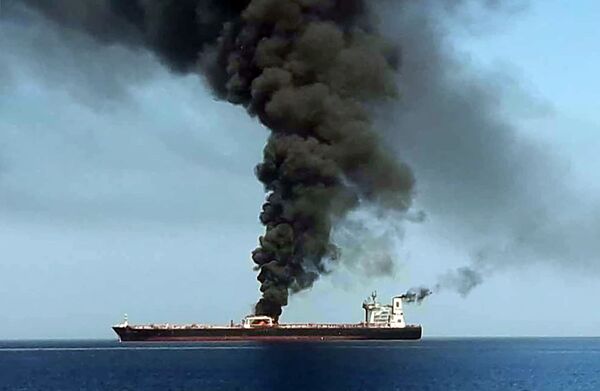 A picture obtained by AFP from Iranian State TV IRIB on June 13, 2019 reportedly shows smoke billowing from a tanker said to have been attacked off the coast of Oman, at un undisclosed location
© AFP 2022 / HO

As several commentators have noted, there are suspicions that these incidents are “false flag” provocations to frame-up Iran. Certainly, the US has a long and sordid history over many decades – from the Spanish-American War in 1898 to the War on Iraq in 2003 – of using fabricated provocations as a convenient pretext for going to war.

It seems blindingly obvious that the scenario of drama between the US and Iran has been dutifully scripted. When Trump’s warmongering National Security Adviser John Bolton ordered the buildup of naval and air forces in the Persian Gulf last month, he cited the need to “counter Iranian aggression”.

Virtually every incident from then on has neatly followed a preconceived narrative deeming to show “Iranian aggression”. When real life starts to follow a script then it is a sure sign that events are being orchestrated for a purpose.

Nobody in their right mind could possibly take US officials seriously in their charade to condemn Iran. People like Bolton and Pompeo have actually publicly admitted – indeed boasted – that they will resort to telling lies for “national security objectives”.

The lack of perceived credibility and integrity in Washington – after multiple illegal wars and brazen false flags down through history – means, paradoxically, that it is the US which is isolated in the eyes of the world, not Iran as American war hawks desire. 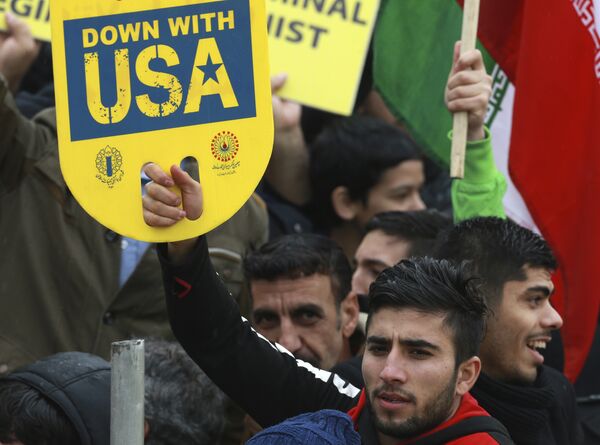 A demonstrator holds an anti-U.S. placard during a ceremony celebrating the 40th anniversary of the Islamic Revolution, at the Azadi, Freedom, Square in Tehran, Iran, Monday, Feb. 11, 2019
© AP Photo / Vahid Salemi

Who actually believes America and its flagrant attempts to corner Iran? Seems like the only people are the Israelis and the Saudi rulers – both of whom have an obsessive hostility towards Iran. Another supporter of US accusations against Tehran is Britain’s Foreign Secretary Jeremy Hunt who has a vested interest in kowtowing to Washington for his political ambitions to become the next British prime minister.

It is an absolute disgrace that the US is pushing a war with Iran based on a heap of falsehoods. From proliferating nuclear weapons to sponsoring terrorism, the American rulers are guilty of projecting their own base criminality.

“Failing again and failing better” is so far an apt description of America’s ineptitude to spark a war with Iran. The failure rate is in itself indicative of a repeated effort at contriving false-flag provocations.

The transparency of the whole criminal conduct should be enough to warrant international condemnation of American rogue-state behavior. The last time a state actor carried out such a concerted policy of provocations to justify war was probably Nazi Germany.

America’s ineptitude at inciting a war with Iran could almost be laughable if it were not for the potentially catastrophic consequences from engendering an all-out conflict. The failure rate of America’s warmongers is not something to mollify fears for world peace.

It only takes one spark in a combustible situation of acute tension. Washington is fully culpable for creating this abominable powder keg. When will the American people hold their rogue leaders to account?