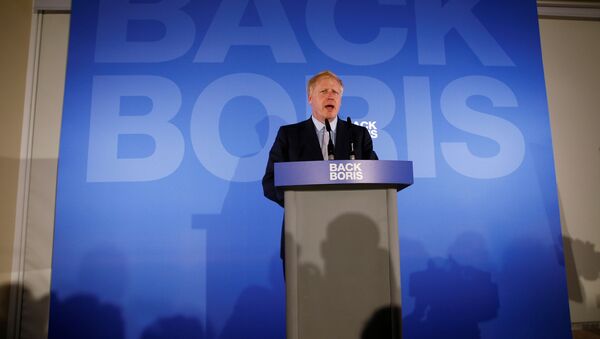 Former British Foreign Secretary Boris Johnson - campaigning to be the next UK Prime Minister - said Tuesday that the United Kingdom would face a catastrophic loss of confidence in politics if the country does not leave the European Union, Reuters reported.

"We must come out on the 31 October because, otherwise I am afraid we face a catastrophic loss in politics [...] Unless we do it, unless we get out on 31 October I think we will all start to pay a really serious price", Johnson said in a televised debate with the other four remaining candidates seeking to be Britain's next leader, according to Reuters.

Boris Johnson, a prominent Brexiteer, announced last week the start of his campaign to be Theresa May's replacement as the Conservative Party leader. Johnson won the first and second rounds of the vote among Conservative lawmakers, with his successor, Jeremy Hunt, coming in second.

In a televised debate on Tuesday, Gove argued that a no-deal Brexit would create economic turbulence, according to Reuters. Javid echoed Gove's statement, stressing that the UK is not prepared for a no-deal divorce with the EU.

Stewart also opposed a no-deal scenario, adding that there would never be a no-deal Brexit.

In turn, Hunt claimed that the Irish backstop would never get through the UK parliament.

Johnson stressed, however, that the issue of the Irish border could be solved during the implementation period with the EU.

"You can solve the questions of how do you keep goods flowing freely across that border whilst the UK comes out of the EU as a whole. You can solve that issue during the implementation period whilst we negotiate the free-trade deal [...] That is the way forward", Johnson said Tuesday in a televised debate, cited by Reuters.

Theresa May stepped down earlier in June, remaining in a caretaker position as prime minister until a leadership contest is held to elect her successor. She has been criticized for failing to deliver on the promise to take the country out of the EU, which millions voted for in 2016. The deadline for London's exit from the economic bloc is 31 October.

The UK political landscape is gradually transforming as lawmakers have not yet reached an agreement on the nation's exit from the union. In 2016, the nation held a landmark referendum that was meant to decide its future - to stay in the 28-nation European Union or not. The majority voted for the exit.

Three years on, Prime Minister May, who assumed her post after the Brexit vote, has failed to achieve a consensus in parliament and within her own party over the country's withdrawal from the EU.

In the meantime, May's potential successor, Boris Johnson, who served as London mayor and foreign secretary, has repeatedly insisted that the UK will be out of the bloc on 31 October, the new Brexit deadline, regardless of whether lawmakers in London approve a withdrawal agreement or not.

The Irish border issue has been a stumbling block in the EU-UK Brexit talks. In November 2018, Brussels and London agreed on the Brexit deal, including the so-called backstop that would be put into practice if the sides failed to agree on all the terms of their relationship by the end of the Brexit transition period. The backstop would keep Northern Ireland in the EU Customs Union if London and Brussels failed to reach the deal.

According to media reports, Tory lawmakers will vote again on Wednesday and, if needed, Thursday. The final two contenders will go to a by-mail ballot of all 160,000 Conservative Party members nationwide.