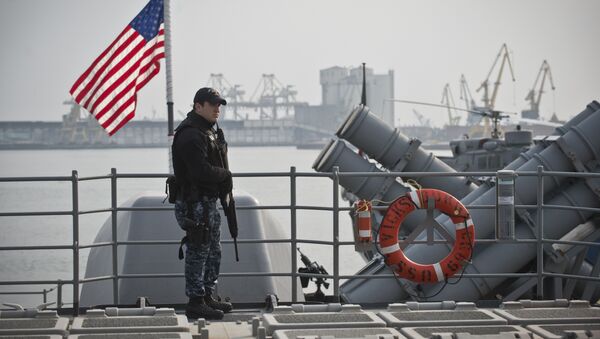 Tommy Sheridan
All materials
It was the Spanish philosopher, poet and novelist, George Santayana (1863-1952), who warned us all: "Those who cannot remember the past are condemned to repeat it".

Watching the unfolding US promoted narrative in the Persian Gulf seas over this past few days and weeks those words should ring loudly in the ears of everyone who values peace and opposes the carnage, destruction and horrific waste of life delivered by war.

If you swallow the American propaganda plastered across newspaper front pages and dominating news bulletins on every Western TV news channel then you really are as bright as a dark night.

On the morning of Thursday, June 13th, two oil tankers were allegedly attacked in the Gulf of Oman, just off the coast of Iran. The US government immediately blamed Iran for the incident, without providing any evidence.

The vessels happened to be en route to Japan at precisely the same time that Japanese Prime Minister Shinzo Abe was in Tehran. The first Japanese leader to visit Iran since its revolution 40 years ago, Abe was holding a historic meeting with Ayatollah Ali Khamenei when the incident took place.

What a great plan. It must have taken months of intense thought and deliberation amongst the smartest cookies at the very top of the Iranian government.

Let's get this Japanese dude over here for groundbreaking talks about peace and trade in the region and while he’s here we should attack two oil tankers on their way to his country… It's ingenious. It will really endear us to Japanese hearts and show the world just how committed to peace we really are… Oh and while he is here we will take him to an Elvis Pressley concert and transport him around Tehran on a flying carpet.

US Secretary of State Mike Pompeo and National Security Advisor John Bolton have honed their skills in deceit and downright lies over many years dedicated to promoting scenarios to justify wars and US Military interventions regardless of the truth and subsequent loss of lives.

Bolton was such a strong advocate of the US war in Vietnam that he supported it from afar in the safe confines of Yale Law School. He was also convinced Iraq had to be invaded to destroy their weapons of Mass Destruction no matter the cost in lives or the amount of blood spilt.

Pompeo and Bolton lie incessantly about Venezuela, Iran and the Nuclear Non-Proliferation Treaty, North Korea and now the tanker incidents in The Gulf of Oman. They are as credible as Bill and Ben the Flowerpot Men and their lying abilities make Pinocchio rage with jealousy.

Those with even a morsel of brain matter between their ears can see right through the two chancers selling wars like a second-hand car salesman would be punting cars with doctored miles and baldy tyres.

The fact they are given media platforms and space to spout their horror fantasies makes them dangerous individuals. They are however only following the well-trodden US path of inventing incidents to justify wars.

As far back as 1898, the American government understood the formula required to prepare the ground for military invasions and wars. Cuba had fought several wars of independence against Spanish colonial rule when America sent the USS Maine battleship to Havana under the pretext of protecting the American Consul on 24th January 1898.

Less than three weeks later Maine was sunk by a huge explosion on February 15th and 266 of its crew were killed.

Outrage against the Spanish followed despite the Commander of the ship urging caution against jumping to conclusions. He was ignored and the main circulation newspapers labelled the Spanish savages and demanded retaliation against the bloodthirsty animals. The de-humanising of enemies is a time-served practice of the US still deployed with gusto today.

Newspaper owners sent hundreds of reporters and photographers to cover the apparent Spanish attacks. Upon arrival, many were disappointed. Frederick Remington wrote to William Randolph Hearst of The Journal saying:

"There is no war …. Request to be recalled".

For weeks, The Journal dedicated more than eight pages per day to the explosion (J. Buschini, "The Spanish-American War", Small Planet Communications, 2000).

Through ceaseless repetition, a rallying cry for retaliation grew into a roar.

"In the papers, on the streets and in…Congress. The slogan was 'Remember the Maine! To hell with Spain'". (Buschini)

With the US public and government safely on board, the US set sail for war launching an era of "gunboat diplomacy". Anti-war sentiments were drowned out by the sea of cries for war. On 25 April 1898, the US Congress declared war on Spain. Thousands of Spanish troops were killed. Multiple atrocities were committed against those taken prisoners.

Within four months the US replaced Spain as the colonial power in the Philippines, Guam and Puerto Rico, and devised a special status for Cuba.

Problem is the Spanish didn't sink the Maine. It was deceit manufactured to justify a war.

In 1975, an investigation led by US Admiral Hyman Rickover concluded that there was no evidence of any external explosion. The explosion was internal, probably caused by a coal dust explosion. Oddly, the ship’s weapons and explosives were stored next to the coal bunker (Michael Rivero, "Dictatorship through Deception", New Republic Forum, 24 December 1999).

Events and incidents have been similarly invented or deliberately manufactured by the US and its allies ever since 1898 to justify their involvement in wars or military invasions.

The public was not told that passengers were, in effect, a 'human shield' protecting six million rounds of US ammunition bound for Britain (James Perloff, "Pearl Harbor", The New American, Vol. 2, No. 30, 8 December 8 1986).

To Germany, the ship was a threat. To Britain, it was bait for luring an attack. Winston Churchill was the British Admiralty leader at the time. Historical documents expose the fact he was willing to sacrifice the lives of over a thousand civilians including, crucially, 124 American civilians.

He had calculated, almost certainly in cahoots with the Woodrow Wilson government in America, that the munitions loaded onto the passenger ship would compel the German submarines to attack (Winston Churchill, cited by Ralph Raico, "Rethinking Churchill", The Costs of War: America's Pyrrhic Victories, 1997).

Detailed knowledge of the presence of German U-boats on the path to be used by the Lusitania was in the hands of Churchill and naval intelligence. No warnings were issued to the defenceless passenger ship. No naval escorts were arranged. It travelled at a considerably reduced speed. A trap was set and the German U-boat did what was expected of it. That tragic loss of life provided the justification for President Woodrow Wilson to mobilise American involvement in World War One (Harry V.Jaffa, "The Sinking of the Lusitania: Brutality, Bungling or Betrayal?" The Churchill Center).

Similar cynical calculations, with wanton disregard for the loss of life, were at play in the manoeuvres to create the justification for US involvement in World War 2.

On 7 December 1941, Japanese bombers attacked the US Pacific Fleet in Pearl Harbour, Hawaii, killing about 2,460.

US President Roosevelt and his closest advisors, not only knew of the attack in advance and did not prevent it, they had actually provoked it. Lt. Arthur McCollum, head of the Far East desk for US Navy intelligence, wrote a detailed eight-step plan on 7 October 1940, that was designed to provoke an attack (Steve Fry, "Author: FDR knew attack was coming", The Capital-Journal, 12 June 2001).

"We face the delicate question of the diplomatic fencing to be done so as to be sure Japan is put into the wrong and makes the first bad move — overt move".

On 25 November, after another meeting with FDR, Stimson wrote:

"The question was: how we should manoeuvre them [the Japanese] into the position of firing the first shot". (Henry Stimson, cited by Robert Stinnett, Day of Deceit: The Truth about FDR and Pearl Harbour, 2000)

The US had cracked Japanese diplomatic and military codes ("The MAGIC Documents: Summaries and Transcripts of the Top-Secret Diplomatic Communications of Japan, 1938-1945", GB 0099 KCLMA MF 388-401).

A Top Secret Army Board report (October 1944), shows that the US military knew: "the probable exact hour and date of the attack" (Paul Proteus, "Part One: Pearl Harbour", America's Phoney Wars)

On 29 November 1941, the Secretary of State revealed to a reporter that the attack's time and the place were known. This foreknowledge was reported in the New York Times (8 December 1941) (Michael Rivero, "Dictatorship through Deception", New Republic Forum, 24 December 1999).

The Korean War in 1950 was started on the back of a lie about an unprovoked attack by North Korea on South Korea and the United Nations was deliberately deceived by the American government.

America's official involvement in the Vietnam War was justified on the back of another lie, another fictitious incident. They had of course been involved covertly for many months supplying arms, training and special forces to aid South Vietnam against the communist-controlled North of the country but on 30 July 1964 it was reported by US intelligence that North Vietnamese torpedo boats had launched an unprovoked attack on the US Destroyer, the USS Maddox, in North Vietnam’s Gulf of Tonkin. It was a complete fabrication.

A barefaced lie. A lie promoted on National TV by President Lyndon B. Johnson. In the nine years of war that followed (8 March 1965 – 29 March 1973) as many as 4 million lives were lost, including 2 million civilians.

In 1983 America invaded Grenada on the basis of a pre-planned and CIA organised coup within the country. The Organisation of American States (OAS) "deeply deplored" the invasion and the United Nations Security Council voted by 11 to 1 against it but America ignored the protests and carried on regardless based on the pretext it’s military intelligence had already prepared.

The 1989 invasion of Panama was justified on the basis of the alleged unprovoked killing of an American soldier at a checkpoint within the country. Detailed investigations including eye-witness reports afterwards exposed the truth that the US soldiers had opened fire first and killed civilians including a child. No matter the truth. The lie was used as the pretext to justify the invasion.

We are all familiar with the lies which justified the 2003 invasion of Iraq. Intelligence Reports were fabricated to suggest the presence of WMD’s. Arms Inspectors who refuted the existence of WMD’s prior to the invasion were withdrawn and silenced. Those who spoke out were undermined and rubbished. A "shock and awe" hell was unleashed on the Iraqi people and at least one million lives were destroyed. All based on a lie, a false flag, a manufactured justification.

Iran Attempted to Down US Drone Hours Before Gulf of Oman Incident, Media Claims https://t.co/yxxYWAni9U pic.twitter.com/Ml7qG3fVDc

Today America is at it again. Grainy black and white videos offered as 'proof' of Iranian involvement in attacks on the oil tankers have been dismissed politely as "inconclusive" by some governments and as complete nonsense by others. Apparently, they show Iranian Revolutionary Guard forces attaching mines to the hull of one of the tankers.

But Yutaka Katada, the president of the Japanese company operating the Kokuka Courageous tanker hit by an explosion damaging its hull, has refuted the US version of events in comments to the Japanese media, saying that the ship's crew saw a flying object ahead of the blast.

No one in their right mind should be conned by more US lies. The least likely to be involved in these oil tanker attacks is Iran. The most likely to be involved is the US to provide the pretext for yet another military attack or invasion against a country which refuses to toe the Yankee line and do what Washington demands. Don’t believe the hype. Reject US lies and warmongering manoeuvres against Iran.