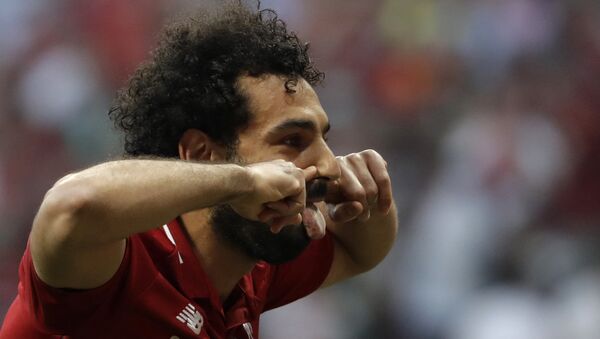 © AP Photo / Felipe Dana
Subscribe
The forward linked up with the national team before the Africa Cup of Nations earlier this week. After a stunning win in the Champions League final with Liverpool, Salah was given extended time off.

Liverpool star Mo Salah received a gift from the Egypt national team following his victory in the Champions League finals.

The national team presented the star player with two cakes upon his return. One of the cakes depicted a miniature football pitch with an edible image of the Reds star himself, a champions league trophy, and a large golden boot next to the left goal.

The second cake was made of wafers and chocolate strawberries. Egypt captain Ahmed Elmohamady is next to Salah who can be seen holding a knife.

Liverpool's Family Man Mo Salah Dodges Journo's On-Camera 'Kiss Attempt' (VIDEO)
However, some fans claim they saw an x-rated item on the cake, pointing out the phallic-like appearance of the golden boot.

Footage has recently surfaced of the celebration. In the clip, the whole team are standing while Salah is standing in front at a table.

The squad appears to be laughing and having fun while the cakes lay in front of them, which Salah prepares to cut.

The 26-year-old failed to win the Golden Boot across the course of the championship, managing only 22 goals in the tournament, missing by just one point.

​The video received over 80,000 views after it was shared on Twitter. Popular social news site Reddit also got hold of images from the celebration. The Anfield Faithful were dubious about the “golden boot”, as were many online supporters.

Some made light of the star player having come up short for the Golden Boot.

“I didn’t even know Salah won the Golden Peanuts this year,” they said.

Netizens were quick to point out that the cakes had two distinct meanings.

Egyptian-born Mohamed Salah is one of the most celebrated forwards in European football and a fan favourite at Anfield. Salah signed a new contract and joined the Liverpool team in the summer of 2017. He kicked off with 44-goals during his debut season and topped the Liverpool scoring charts this season with 27-strikes.

WATCH Liverpool Star Salah Dance Wearing UCL Medal
In Madrid in June 2019, he seized the title of Champions League winner as Salah smashed a stunning victory against Tottenham Hotspur with a second minute penalty, securing the 2-0 win for Liverpool.

​This was followed by the tearful victory celebration of Virgil van Dijk at the Champions League final.

Overwhelmed by his achievements and being awarded man of the match, the Dutchman collapsed into tears at the last whistle.