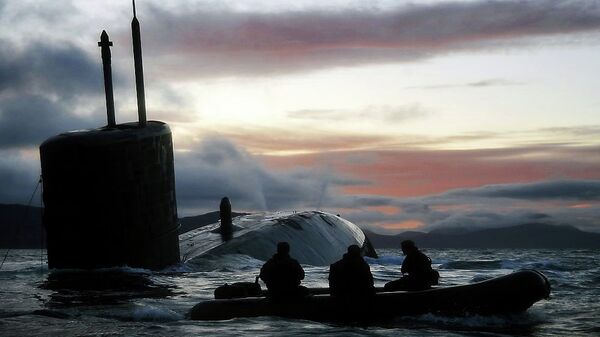 © Flickr / UK Ministry of Defence
Subscribe
International
India
Africa
The scandal aboard the HMS Vengeance bears close resemblance to a similar incident that occurred just two months ago, when seven misbehaving sailors were tossed off another Royal Navy sub, the HMS Talent.

Three sailors aboard the Royal Navy's HMS Vengeance submarine, which is equipped with 16 nuclear missiles, have been caught snorting cocaine, The Mail on Sunday revealed.

Last night, the Royal Navy said: “The Ministry of Defence has a zero-tolerance drugs policy and will not tolerate misuse of drugs by service personnel in any form or at any time. Any personnel caught taking drugs will be discharged."

The seamen failed their Compulsory Drug Test for the Class-A substance while on a top-secret mission and were promptly booted off the 15,900-tonne vessel after it had docked at a US military port in Florida.

UK Royal Navy Leads Its LARGEST Task Force in Europe in Decades
The offenders’ urine samples were examined while they were still on duty, and the seamen were removed from the HMS Vengeance the moment she returned to Her Majesty’s Naval Base Clyde at Faslane, Scotland.

Military sources claimed the three sailors were not the only culprits on board the sub, with a larger group of crew members having also indulged in cocaine during a ‘run ashore’, but they'd prudently consumed copious amounts of water to flush the drug out of their system, allowing them to pass the CDT.

No comment has been offered by the Royal Navy regarding this claim.

The cocaine scandal aboard the HMS Vengeance scandal bears close resemblance to a similar incident that occurred just two months ago, when The Mail on Sunday revealed how seven cocaine-snorting sailors were kicked off another Royal Navy sub — the HMS Talent — after testing positive while on duty.

The latest drug-related incident has created shockwaves as it occurred aboard a particularly lethal sub.

The 150 metre-long vessel — the youngest of the Royal Navy’s Vanguard class — carries Trident nuclear missiles with a range of 7,500 miles, which can reach a speed of 13,600 mph and pack a destructive force estimated to be equivalent to eight times the atomic blast that struck Hiroshima in WWII.

Vengeance sails with a crew of 121 including 14 officers, with the Royal Navy declining to reveal the ranks of the drug-abusing seaman, who are nevertheless understood to be from the lower ranks.

The Royal Navy maintains a literal interpretation of the Ministry of Defence’s ‘zero tolerance’ policy towards drug abuse, with commanders granting a reprieve only if sailors can prove they were unaware of consuming a banned substance.

Last year saw a series of exposés in The Mail on Sunday about drug-abuse in the Army, where it was revealed that some repeat offenders were given third chances due to the fact that regiments were already under-manned.

Vanguard class vessels have hit the headlines before, when a test-firing of a £17 million Trident II D5 missile from a British submarine, the HMS Vanguard, off the coast of Florida last year malfunctioned.

At the time, UK PM Theresa May came under pressure to come clean in the House of Commons about the failure of the Trident missile test after MPs accused her of covering up the truth before a crucial parliamentary vote on renewing the nuclear deterrent.

Details of the incident were revealed by the Sunday Times, which claimed Downing Street knew about the error when the PM proposed a motion in Parliament on renewing Trident five days into her tenure at No 10.