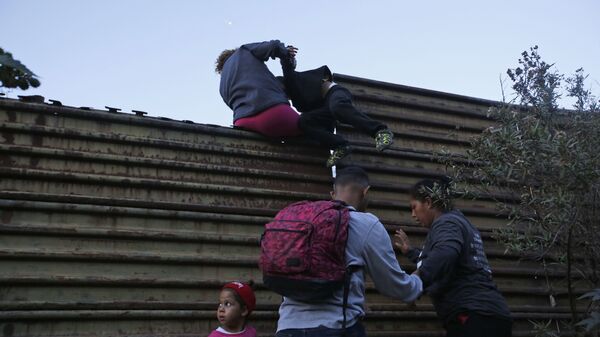 © AP Photo / Moises Castillo
Subscribe
International
India
Africa
On 30 May, Trump said Washington would impose a five percent tariff on all goods imported from Mexico beginning on 10 June that will go up to 25 percent by October unless Washington's southern neighbour alleviates the illegal immigration crisis.

Donald Trump has urged Mexico to fix immigration issues, saying that it's time for Mexico to "finally do what must be done" a day after the US threatened to impose tariffs on Mexican imports.

Mexico has taken advantage of the United States for decades. Because of the Dems, our Immigration Laws are BAD. Mexico makes a FORTUNE from the U.S., have for decades, they can easily fix this problem. Time for them to finally do what must be done!

Mexico's President Andres Manuel Lopez Obrador stated earlier in the day, that he will respond with "great prudence" to Washington's threats to impose tariffs on Mexican goods entering the United States and charged Mexicans to unite to deal with the challenge, Reuters reported.

"I tell all Mexicans to have faith, we will overcome this attitude of the US government, they will make rectifications because the Mexican people do not deserve to be treated in the way being attempted", Lopez Obrador noted.

The US tariffs "won't stop" the ratification of the North American trade deal, the Mexican president stated.

"This does not stop the process that began in order to ratify the treaty. We are going to move forward", Lopez Obrador said.

The president insisted that Mexico is working to stem the flow, saying "we are doing our job, without violating human rights".

​The statement comes after Andres Manuel Lopez Obrador said that an official Mexican delegation, headed by Foreign Minister Marcelo Ebrard, had left for the United States to settle the issue of the planned US trade tariffs.

Mexico Pledges 'Energetic Response' to Trump's Planned Import Tariffs
According to the US president, Mexico could easily halt the illegal flow of migrants and could easily stop them from crossing its southern border with Guatemala.

An increasing number of migrants from Central America have been arriving at the US border with Mexico in recent months. US President Donald Trump has called the surge of arrivals a crisis and declared a national emergency in February to secure funds to build a border wall.