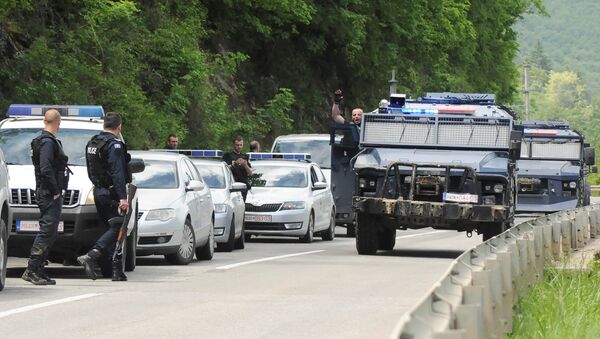 BELGRADE (Sputnik) - Skopje hinders medical evacuation of a Russian employee of the UN mission in Kosovo, Mikhail Krasnoshchekov, who was wounded during the recent raids by the Kosovar police, the Russian Embassy in Belgrade said.

"It is outrageous that Pristina still obstructs evacuation of the UN Mission in Kosovo's staff member Mikhail Krasnoshchekov, savagely beaten up by its 'policemen,' to Belgrade", the embassy said.

At least 18 other people were detained in the raids, according to Kosovo's Hashim Thaci, because of resisting law enforcement officers.

The Russian Foreign Ministry said that the actions of the Kosovar police were conditioned by the long-standing Western support of the self-proclaimed republic.

Russian National, Who Was Detained in Kosovo, Released - UNMIK
On 28 May, Krasnoshchekov was injured in what the Kosovar police called an operation against organised crime in Serb-populated areas in northern Kosovo. The police detained Krasnoschekov because he had opposed the actions of law enforcement officers, but released him as a UN employee. The staffer was hospitalised, and awaits evacuation to Serbia for treatment. Kosovska-Mitrovica’s Chief Prosecutor Shyqri Syla said earlier in the day that he would demand that the immunity be withdrawn from Krasnoshchekov.

In February 2008, Kosovo unilaterally proclaimed independence from Serbia and was subsequently recognised by over 100 UN member states. Serbia, along with Russia, China, Greece, Israel and several other states, do not recognise it.