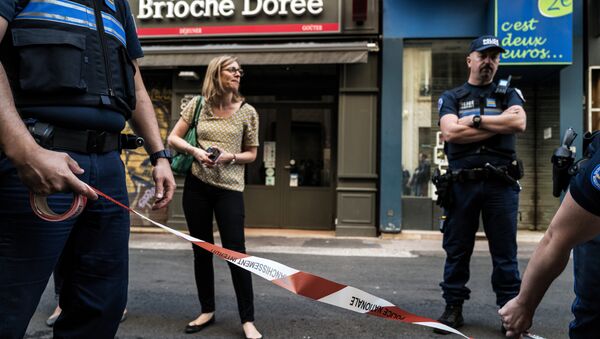 © AFP 2021 / JEFF PACHOUD
Subscribe
On May 24, French media reported that a man, aged 30-35, rode a bicycle to the bakery in Lyon and set aside a bundle, which subsequently exploded.

French law enforcement bodies have detained the second person in connection with the investigation into the blast, Lyon Mayor Gerard Collomb said on Monday.

The mayor did not provide any detail on the role that the detained person had played in the attack.

The statement comes hot on the heels after French Interior Minister Christophe Castaner announced that police had arrested a man suspected of being involved in the last week's paper bag bomb explosion in Lyon.

Castaner praised the efforts of the counterterror department of the French police, Lyon judicial police and the French General Directorate for Internal Security.

Lyon Bomb Attacker Still on the Run, No One Claimed Responsibility - Prosecutor
The senior official, however, hasn't provided any details about the suspect or where he was arrested.

Last Friday, an explosion occurred at the corner of Victor Hugo Street and Sala Street in Lyon at around 17:40 local time (15:40 GMT), injuring 13 people. According to the French Interior Ministry spokesman, the explosive device was a "homemade nail bomb", while local media reported that it had a remote control system.

Following the incident, more than a hundred investigators and technical experts were engaged in searching for the suspect, who was allegedly caught on CCTV cameras.