Dry Your Tears May 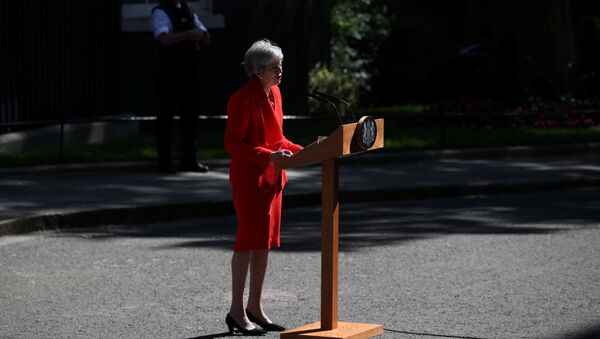 Jon Gaunt
All materials
With the eventual and inevitable resignation of miserable failure Theresa May the only result that matters now is that it is two nil to Nigel Farage.

Team Farage are hammering the Tories and he can now claim two Prime Minister scalps in Cameron and Theresa May and both as a result of the Euro tournament that has plagued the Conservatives for over 40 years. It is certainly a game of two halves!

It was Nigel Farage and his UKIP that forced the referendum on Cameron and with the victory in that contest Cameron had no real choice, or indeed appetite, to continue and therefore resigned and ran away from the field of play.

From the Sub’s bench, or was it from behind the sofa where she had been hiding, Theresa May emerged and somehow, inexplicably became leader and therefore PM.

The same MSM newspapers who are now calling her useless, stubborn and the worst ever PM started by lauding her as the new Iron Lady and conferred on her an almost God like status when the truth was she wasn’t even fit to carry Maggies’ handbag.

They ignored the fact that she had been a useless Home Secretary, mainly because they thought she had done the right thing in standing up to the Police Federation and pushing through 20 thousand police cuts.

Now these same MSM hypocrites bitch and moan about knife crime and the lack of Police! The facts are that the press, all of them not just the tabloids, are stinking hypocrites and will do anything and say anything to sell another copy of their dinosaur rags.

They helped create the image of Mother Theresa. They fuelled her arrogance, stupidity and stubbornness that she could win the game her way and only her way. This led to our great nation being humiliated and beaten up by the undemocratic EU Mafia.

Years ago, these rags and their mates in the lamestream broadcasting media could get away with their tall poppy syndrome, building someone up only to knock them down later, but that game’s up. Because as well as the people of the UK not trusting the political class I believe the majority of people no longer believe or trust the press or the broadcasters, especially the BBC anymore.

We have, with the help of the internet, seen through their lies and “news management” (bias) and decided we no longer need or want them. This is why 3.5 million people have given up their TV licence because they are no longer watching the Biased Broadcasting Corporation.

The facts are that cultural Marxism, common purpose and the social liberal agenda has not only affected the political class it has also infested the main stream media, the civil service, the police, the local government and most major institutions and now commercial outfits.

The bizarre, no the corrupt thing, is none of the people voted for this. None of this liberal snowflake PC Bullsh*t was in any of their manifestos.

The fact she quoted some of this nonsense as achievements in her pitiful resignation speech just proves my point about how useless and non-conservative this woman was.

So, politics is no longer about Tories v Labour or red v blue it is simply about them and us. The Them are the establishment elite who almost to a man voted remain and the US are us patriots who simply want our country back and want to control our destiny.

Britain is fractured or even broken but this hasn’t been caused by the EU referendum but by the years of disdain and neglect of our wishes by this elite. It is as if the elite were willing to put up with us as long as we trooped out every five years and voted tribally. When we decided en mass to vote against their wishes and the desires of the Globalists as represented by the likes Mark Carney, Barrack Obama, the BBC, the media oligarchs and the rest, they didn’t like it and they attempted to ignore the will of the people.

As a result of this arrogance this entire class has been exposed for the control merchants that they are. Now this Establishment Elite bitch and moan and are surprised and outraged that Nigel Farage doesn’t have a manifesto for the EU election? You stupid Muppets, he does not need a manifesto, because you are the manifesto! He has just tapped into and given direction and tactics to the sense of betrayal that you have all been implicit in creating and I am afraid there is no way ever of putting this genie back in the bottle.

So, with Theresa May sent off for an early bath (dry your tears love!) whoever comes on to replace her as Tory leader and therefore PM will have to dance to Nigel’s tune. If the DUP can effectively run the Government agenda with only ten MP’s just imagine what Farage will achieve if he has the predicted 40 or 50 MPs after the next General Election based on what he achieved on Thursday, if the polls are correct.

Even before any general election Nigel will, even without speaking, be dictating the new PM’s attitude to EU negotiations. His presence will already be dictating the tactics of any potential Theresa May replacement. They simply will not get elected leader without deploying some of his playing methods.

When, and it is when not if, Boris is installed he will have to have a pact with Nigel and Nigel will have to be involved in our EU exit negotiations. This idea horrified Adam Boulton on Sky News when it was raised by Brexit candidate, Alexandra Phillips, and he asked if she was being serious? He just doesn’t get it does he? Boulton then went on to say her suggestion that Farage and the Brexit Party would have to be involved was, "close to authoritarian fascism."

You what Adam? Isn’t that effectively what we have been living under for the last three years as the elite have failed to act on the will of the people? Boulton’s attitude sums up the problem, the politicians and their lickspittle mates in the MSM still don’t get it.

I don’t think they will even get it even when the results are announced on Sunday night and Farage and the Brexit party are proved to have completely thrashed the old Parties in the election.

However, there will quite literally be panic on the streets of Westminster. If the predictions are true and Brexit do win big and get around 40 MEP’s coupled with the resignation of Miserable failure May today we will be hurtling towards a General election real soon.

However, a new Tory leader, even a new PM, doesn’t magically remove the EU problem. It is still there and there is clearly no consensus amongst the self-serving pigs of Westminster on what to do next. They are determined not to do what we, their masters have told them to do and leave now on WTO terms so a general election is an absolute certainty. Then every sitting remain MP will see the writing on the wall and that they are about to receive a real beating at the ballot box from the people.

The MSM will and can start “operation fear” again and warn about the dangers of Corbyn getting into number 10 but I don’t think people care because they know that Farage will get significantly more MPs than the DUP have and as such he will control any hung parliament that results from this election. Farage has not only taken down two Tory leaders and two PMs he has changed the rules of the game and destroyed the corrupt two-party system. He has begun to drain the swamp.

Politics is a funny old game! Theresa I am crying too…tears of laughter.