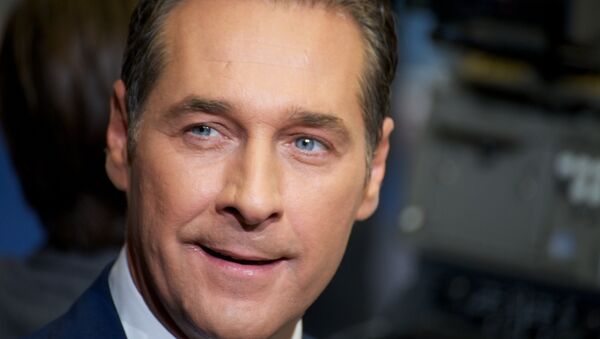 CC BY-SA 2.0 / Gregor Tatschl / Heinz-Cristian Strache
Subscribe
MOSCOW (Sputnik) – Austria’s Supreme Prosecutor’s Office to look into the video released by media claiming that the Vice-Chancellor allegedly discussed the possibility of getting help at elections with a purported Russian woman in 2017, the secretary general in the ministry of Constitutional Affairs, Reforms, Deregulation and Justice said.

Spiegel and Suddeutsche Zeitung reported on Friday, citing the video recording that they obtained, that in 2017, Vice-Chancellor Heinz-Christian Strache, who leads the Freedom Party of Austria (FPO), discussed the possibility of an acquisition of the Kronen Zeitung newspaper by alleged Russian national Alyona Makarova with her in order to secure help at the legislative elections. The outlets claimed that other million-euro deals were discussed at the meetings.

Austria Outlaws Headscarves for Muslim Girls in Primary Schools
"The Supreme Prosecutor’s Office has been instructed to carry out the check," the secretary general in the Austrian Federal Ministry of Constitutional Affairs, Reforms, Deregulation and Justice Christian Pilnacek told the Kurier daily on Friday, emphasizing "there are currently only excerpts from the video recording available," which does not allow assessing the whole context of the situation.

According to Pilnacek, it should be determined if the claims concern a simple chat or "specific instructions for a criminally liable behaviour."

The official noted that prosecutors planned to request the full video from the two media outlets, after which all the necessary steps would be taken.

Pilnacek argued that checking the recording would only be the first step, adding that the question, if an investigation would be launched, was still open.

Notably, the two politicians told Sueddeutsche Zeitung about "a lot of alcohol consumed" during the meeting, saying they also felt "significant language barrier" during it.

Meanwhile, the Austrian Court of Audit commented on the reports.

"The Court of Audit has to ask the FPO for explanations," the court's spokesman, Christian Neuwirth, wrote on Twitter.

​Beate Meinl-Reisinger, the chairwoman of the opposition NEOS party, wrote on Twitter that Strache should step down, saying that "the new elections are unavoidable."

Pamela Rendi-Wagner, the chairwoman of the opposition Social Democratic Party of Austria (SPO), in her turn, wrote on Twitter that the party members had demanded an emergency session of the National Council, the lower house of the Austrian parliament, to be held on May 22, in order for the involved politicians to answer before lawmakers.

000000
Popular comments
You want to win an election ? No problem, just talk with "Alyona Makarova" and consume some alcohol while at it, and behold.. suddenly you are a vice- prime minister !! Its easy.