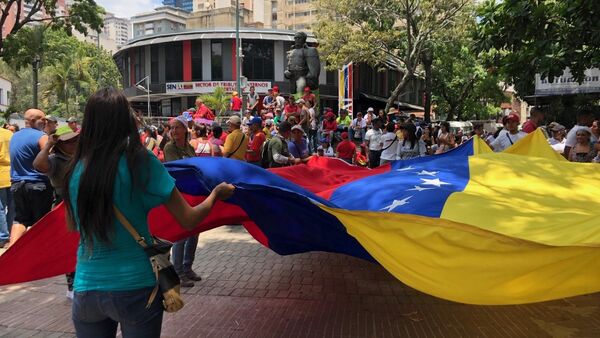 According to Barrientos, since US-backed Venezuelan opposition leader Juan Guaido illegally proclaimed himself the country's interim president in January, the US and European banks have frozen billions of dollars worth of the Venezuelan government’s bank accounts. In addition, the United States has blocked the country's oil assets and imposed sanctions on state-run oil company PDVSA.

"In connection with these sanctions and blockade, the country has lost about $30 billion over the past three months. This has caused great difficulties with the supplies of essential goods, products and medicines to the country," Barrientos said.

According to the ambassador, US sanctions against Venezuela have impaired the country's health care system. As an example, he mentioned the blocking of Venezuela’s $9 million payment via an international account for dialysis supplies in 2018. As a result, 15,000 patients were left without the required treatment.

"And if you count, these sanctions have led to the deaths of 40,000 people. This research was conducted by two Americans [world renowned economists Jeffrey Sachs and Mark Weisbrot]. This [40,000 deaths] has happened since sanctions were imposed on us. The blockade has worsened since Guaido emerged", Barrientos added in a reference to the April report.

In April, Sachs and Weisbrot published their study, saying that more than 40,000 Venezuelans had died as a result of restrictions implemented by the Donald Trump administration since August 2017.

US Civil Rights Icon Jesse Jackson Resupplies Blockaded Venezuelan Embassy in DC
Venezuela has long been suffering from an economic crisis amid the protracted political turmoil and US economic sanctions. The US sanctions have been in effect since March 2015, when then-President Barack Obama imposed them on a number of Venezuelan officials over alleged human rights abuses and corruption. The restrictions have since been repeatedly expanded.

The ambassador also noted that Arab countries have taken the side of legitimate Venezuelan President Nicolas Maduro amid the political crisis in the Bolivarian republic.

"In international relations, Arab countries support and respect the Venezuelan government, because Venezuela is a great friend of the Arab world. We hope that this respect, support and the recognition of our ambassadors in the Arab world will continue", Barrientos said.

The diplomat added that all Venezuelan ambassadors in Arab nations remained loyal to Maduro.

World
Venezuela's Guaido Officially Requests US Military Support - Letter
The situation in Venezuela remains tense since January when US-backed opposition leader Juan Guaido illegally proclaimed himself the country's interim president. Washington and its allies endorsed Guaido, while Russia, China, Cuba, Bolivia, Turkey and a number of other countries have voiced their support for Maduro as the only legitimate president of Venezuela.
Newsfeed
0
Access to the chat has been blocked for violating the rules . You will be able to participate again through:∞. If you do not agree with the blocking, please use the feedback form
The discussion is closed. You can participate in the discussion within 24 hours after the publication of the article.
To participate in the discussion
log in or register
loader
Chats
Заголовок открываемого материала