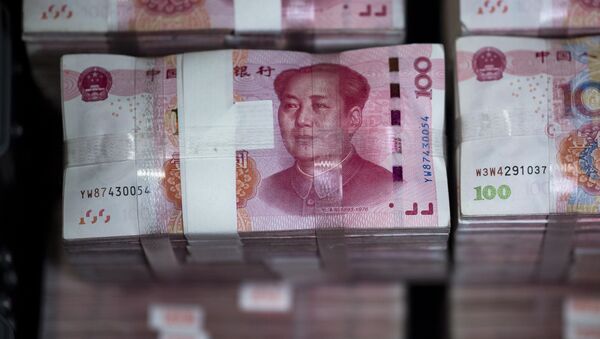 Chinese central bankers say financial stability remains their main priority amid elevated trade tensions with the US, despite economists expecting lower interest rates and a weaker renminbi to allow them to offset the impact of US tariffs.

Kristian Rouz — The People's Bank of China (PBOC) says it won't let the renminbi depreciate below 7 per US dollar despite many experts suggesting the central bank could do just that to offset the negative effects of steep US tariffs on the mainland's economy.

The PBOC said it would ramp up its gold reserves and sell the renminbi at the market value, while abstaining from the dramatic easing of its monetary policies.

According to several reports citing unnamed sources at the Chinese central bank, the PBOC will use its foreign and currency reserves to support the renminbi's FX rate at its current levels, if necessary. Such interventions are aimed at reassuring domestic and international investors of the sustainability of China's financial system.

The mainland's monetary policy framework has been in question since US President Donald Trump slapped 25-percent tariffs on roughly $200 bln worth of Chinese imports to the US. Some economists have suggested China could cut interest rates, ramp up cash injections into its banking system, and devalue the renminbi to support the international competitiveness of its goods.

However, officials in Beijing say such measures aren't necessary as of yet, and investor confidence remains a higher priority than the volume of Chinese exports at this point.

"At present, rest assured, they will certainly not let it break 7," an anonymous official said, as quoted by Reuters. "Breaking 7 is beneficial to China because it can reduce some of the effects of tariff increases, but the impact on our renminbi confidence is negative and funds will flow out."

Chinese officials are confident they will be able to maintain the renminbi's stability for the rest of this year, as the PBOC has been stockpiling gold for the past five months. In April, China's gold reserves increased by 480,000 ounces (oz.), to 61.1 mln oz.

"Our monetary approach has not changed based on current overall and structural data," PBOC monetary policy department director Sun Guofeng said. China has sufficient leeway and a deep monetary policy toolkit, and therefor has the full ability to deal with uncertainties."

However, the renminbi has depreciated to 6.91 per dollar, its weakest since December, on Friday — just one week after Trump enacted the latest round of US tariffs. This as some investors have rushed to dump Chinese assets in the wake of Washington's latest push towards higher tariffs.

However,remarks from PBOC officials suggest the central bank might be preparing a currency intervention to stave off the risk.

Economists, however, remain unconvinced, and are suggesting Beijing could combine limited monetary easing with interventions in the currency market — to both support the economy, while reassuring investors of stability of asset prices.

A weaker renminbi, lower PBOC interest rates, and cash injections could support China's exports. However, a devaluation would have to be deep enough to compensate for the increase in tariffs: up to 20 —percent in the US. Looser monetary policies would also exacerbate capital flight from China, and weigh on domestic investment, erasing potential GDP gains.

This appears to be the main reason why the PBOC puts financial stability above the volumes of exports.

Still, Chinese officials said they are still inclined to continue trade discussions with the US — although retaliatory measures remain an option as well.