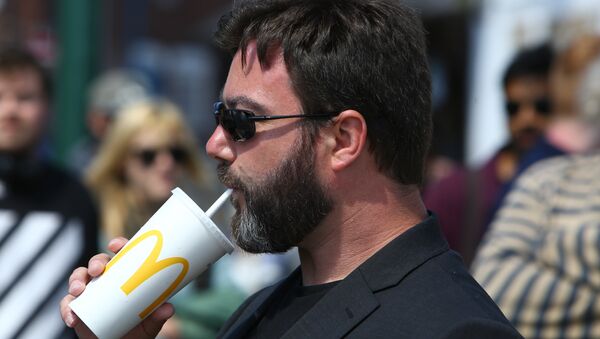 © AFP 2021 / GEOFF CADDICK
Subscribe
Carl Benjamin, the popular but controversial YouTuber 'Sargon of Akkad' who’s standing as a UKIP candidate in the European elections, has had three milkshakes thrown at him in the space of three days on the campaign trail.

The latest attack occurred in Totnes, Devon — the soaked parliamentary hopeful who'd been due to address crowds with Milo Yiannopolous, was led away by party apparatchiks as crowds jeered him. The thrower has since been arrested — although police have made no arrests in their investigation into who slashed the UKIP campaign bus' tyres later that day, delaying the party's next scheduled campaign stop in Exeter.

Electioneering has been somewhat disastrous for Benjamin so far.

​On 10th May, his election drive kicked off in Truro, Cornwall — members of the crowd chanted abuse upon his arrival, kippers were thrown at him, then a milkshake was tossed in his direction. The next day in Plymouth, the UKIP campaign bus was given a parking ticket, and then hit with a milkshake, covering the large picture of party leader Gerard Batten which adorns the side in sticky, garish liquid.

We are all the guy who greeted Carl Benjamin by throwing a milkshake, or the woman throwing dead fish, or the other woman holding a sign saying, "Super callous fragile racist sexist UKIP a***hole”.

​Benjamin would go on to announce to supporters and demonstrators alike that rape jokes were acceptable, in reference to controversial comments — a reference to the controversy surrounding several remarks he's made about Labour MP Jess Phillips.

​In May 2016, Benjamin tweeted at her "I wouldn't even rape you ##AntiRapeThreats #FeminismIsCancer". The comment, since deleted, has been repeatedly invoked and condemned since Benjamin announced his candidacy 19th April — on the 26th, he responded to his critics by posting a video on his YouTube channel in which he sarcastically apologised for his "hardline stance of not even raping her" and suggested "with enough pressure" he "might cave".

The statement is being investigated by police, and has prompted YouTube to demonetise ‘Sargon of Akkad' — which is apparently his primary source of income.

UKIP candidate Carl Benjamin (AKA Sargon of Akkad) lost the ability to make money off of YouTube, according to his Minds account.

UK police are also investigating him for talking about rape in the context of female Labour MP: pic.twitter.com/dktv3dmc02

​Milkshakes have seemingly become a popular form of aggressive but non-violent protest for opponents of controversial figures in UK politics. For instance Tommy Robinson, who's standing as an independent in the European elections, was hit with milkshakes in two days while campaigning in Bury and Warrington earlier in May.