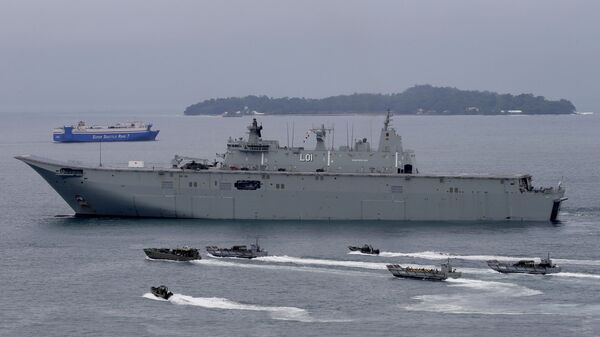 The statement comes after the joint naval exercises of the US, Japan, the Philippines and India took place in the contested South China Sea. The naval drill prompted a harsh reaction from China, which said that ‘policies and actions' in the region should maintain peace and stability instead of undermining them.

US State Secretary Mike Pompeo, while speaking at the Clermont Institute, said that the US cooperates with Australia, India, Japan and South Korea in a bid to ensure the sovereignty of each Indo-Pacific nation from what he called "coercion."

"We are banding together with the like-minded nations like Australia, India, Japan and South Korea to make sure that each Indo-Pacific nation can protect its sovereignty from coercion," Pompeo said as cited by the Times of India.

"It's part of a greater commitment to free and open order. You all know this: The distinctive mark of western civilization is the belief in the inherent worth of human beings, with the attendant respect for God-authored rights and liberties. Indeed, the declaration says that 'all men are created equal'. And we ought to help nations protect these first things — and human rights as well," he said.

Then, the US Secretary of State switched to the topic of China, saying that the latter allegedly threatens American national security in terms of activities of Chinese technological giants, Huawei in particular.

"The President has taken action to stop China from stealing our stuff. No longer will American companies be forced to hand over their technological crown jewels as the price of doing business in China. When a deal doesn't work for the United States, no deal shall be done," Pompeo said.

"We have strengthened the group, the entity, that screens Chinese and other foreign investments here in the United States. We are also fighting the battle to make sure that the Chinese Communist Party cannot burrow into the data of billions of internet users through companies like Huawei and ZTE," he said.

Pompeo reportedly suggested that the framework of the internet of tomorrow must be built on Western values, and not those of China, according to the Times of India.

He also briefly touched on the Middle East, saying that the US has "reaffirmed America's historic alliance with the only free nation in the Middle East: Israel," according to the Times of India report.

US Warship Carrying 10 F-35B Jets Spotted in South China Sea - Reports
From 3 May to 8 May a multilateral naval drill with warships from the United States Navy, the Japan Maritime Self-Defense Force, the Philippines Navy, and the Indian Navy took place in the South China Sea, according to the Times of India.

The drill involved a Japanese aircraft carrier, a US destroyer, two Indian naval ships and a Philippine patrol vessel.

Reacting to the development, the Chinese foreign ministry said that the countries should not indulge in any action that undermines peace and stability in the region.

Along with China, portions of the South China Sea are claimed by the Philippines, Vietnam, and Malaysia, as well as Taiwan, an island nation which Beijing considers part of its territory. The waterway is a major strategic passage, with over $5 trillion-worth of ship-based cargo, including much of China's Middle Eastern oil supplies, estimated to pass through its waters every year. Much of the sea territory is also rich with fishing and energy resources.