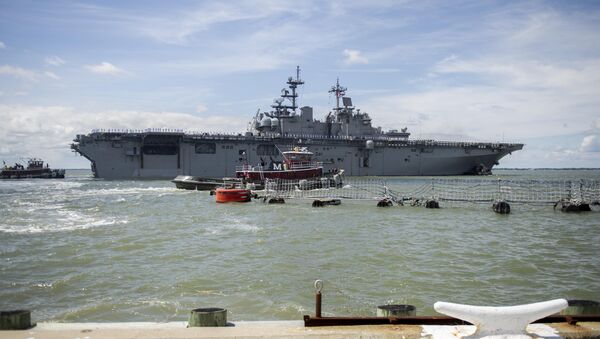 The US ship is scheduled to participate in the Balikatan naval exercises between the Philippines and the United States, which will involve some 4,000 Philippine and 3,500 US troops, as well as a small group of Australian servicemen.

US Navy amphibious assault vessel the USS Wasp, carrying a large number of F-35B fighter jets, has been spotted in the South China Sea, Business Insider reported on Tuesday. According to the outlet, the warship is carrying at least 10 F-35B Lightning II stealth fighters, as opposed to the standard six planes.

"US and Philippine forces will conduct amphibious operations, live-fire training, urban operations, aviation operations, and counterterrorism response", the US Navy said in a statement.

As South China Sea Showdown Heats Up, US Marines Revisit Island-Hopping Strategy
The USS Wasp and fighter aircraft are participating in the Balikatan exercises for the first time and are meant to boost the drills, which are being conducted near disputed territories in the South China Sea.

Beijing claims ownership of 90 percent of the sea, including the Paracel Islands, but the claims are disputed by a number of Southeast Asian nations, including the Philippines.