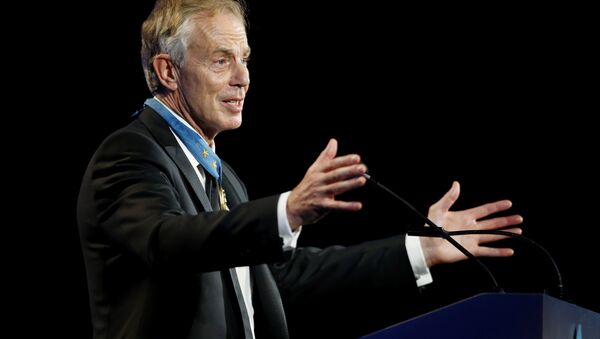 MOSCOW (Sputnik) - Former UK Prime Minister Tony Blair voiced the belief in his interview for the Sky News broadcaster on Sunday that a no-deal exit from the European Union could spark a "silent revolution" in the country.

Blair said that while UK politicians were discussing the need to avoid riots by ardent Brexit supporters, a silent protest was also a worrying option.

"If we go ahead and tumble out of the European Union with a no-deal Brexit of the sort that [former leader of the UK Independence Party, Nigel] Farage and [former UK Foreign Secretary] Boris Johnson and these people want, you are going to get a silent revolution in this country as well… There are people who are going to feel so strongly about this, that I just say this to both main political parties — they're going to sweep them away," Blair said.

Blair, who used to serve as the prime minister between 1997 and 2007, warned that a no-deal Brexit, favored by Farage and Johnson, would cause "extreme damage" to the United Kingdom.

Liberal Democrats' 'Bollocks to Brexit' Slogan Provokes Mixed Reactions
Blair, who has long been speaking in favor of a second Brexit referendum, added that withdrawal from the European Union was in fact an "answer to nothing."

He noted that the share of remainers in the country was "larger and stronger" than that of Brexiteers.

The Brexit deadline was subsequently moved to October 31.