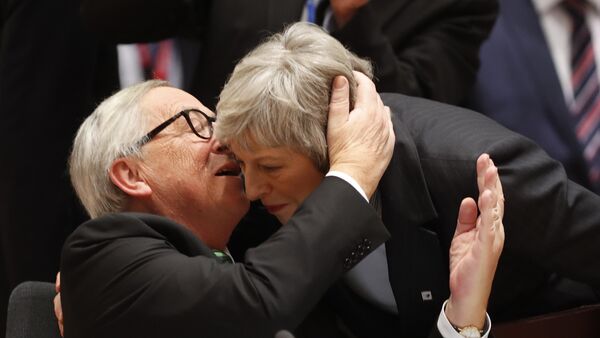 © AP Photo / Alastair Grant
Subscribe
European leaders met in the Romanian city of Sibiu Thursday to launch a five-yearly renewal of the top EU jobs and map a future without the UK.

At their summit in Romania, European leaders revealed a statement guiding of principles for a post-Brexit future, holding out the promise of a "new Union of 27 ready to embrace its future as one".

EU leaders gathered on Thursday with Prime Minister Theresa May conspicuously absent as the United Kingdom, the missing 28th EU member, has yet to complete its divorce from the bloc. This was the third time the leaders gathered without the British prime minister since the Brexit referendum.

Asked whether he wished Theresa May was at the summit, Jean-Claude Juncker, President of the European Commission, said: “I am missing her.”

For the 1st time, an informal summit brings EU leaders together exactly on #EuropeDay! #SibiuSummit is first and foremost about the future, about what unites us. #FutureOfEurope pic.twitter.com/hPqY1PYiTs

Before the end of the year, five EU jobs will become vacant, including the presidency of the European Commission, European Central Bank and European Council, currently held by Donald Tusk.

Calling to look ahead to the EU’s post-Brexit future, Tusk said he wanted EU leaders to agree upon nominations in June, saying decisions could be made via qualified majority voting if there was no unanimity.

“Consensus is always better than voting,” he told journalists after the summit. “But I have no illusions that consensus will be easy or possible. And I will not wait three months.”

The EU leaders, including the British prime minister, will convene for a special summit on 28 May, in the wake of European elections.

The current EU summit was conceived as a show of unity, as it fell on “Europe Day”, with the EU leaders pledging to stick together “through thick and thin”.

However, that said, the distribution of top positions is already causing discord, with the bloc divided on the process of allocating jobs.

The European Parliament favours a system of lead candidates linked to election results, in a process could see the relative newcomer German MEP Manfred Weber become the next commission president.

Many EU leaders take exception to ceding control over the process to parliament. Under EU law, European leaders nominate new leaders, who must be approved by MEPs.

The EU leaders signed up to ten key pledges in the Sibiu declaration, which outlined the EU's agenda for the next five years, addressing issues such as economic prosperity, security, and climate change, among others.

NATO Plane ‘Patrols the Skies’ Over Romania as EU Leaders Discuss Bloc’s Future
Despite EU leaders refusing to discuss the UK, they couldn’t ignore its presence, as the Sibiu declaration, adopted at the summit, sought to map a future for the EU after Britain’s divorce is finalized.

EU member states remain at odds over Brexit, which has been only exacerbating tensions within the bloc, with charged expressions frequently used in exchanges between UK and EU leadership.

In one instance, Theresa May confronted the European Commission President Jean-Claude Juncker for saying that UK's Brexit approach was "nebulous", while European Council President Donald Tusk in March said that there was a "special place in hell" for ill-equipped Brexit supporters in the UK government.

The EU, divided enough over the challenges it faces in coming months, knows Brexit may return to dominate summits again before long.

000000
Popular comments
Yes, and no doubt this scum bag Junker a pedophile as well!!! Goes to show how much a fascist style of a regime it is when these parasites claiming five UN-ELECTED ( not elected by official European countries) positions being available by years end. Europe do not need a NWO EU regime to dictate what they need, its up to the proper elected governments to do that. They all need to pi$$ off the EU/NATO.