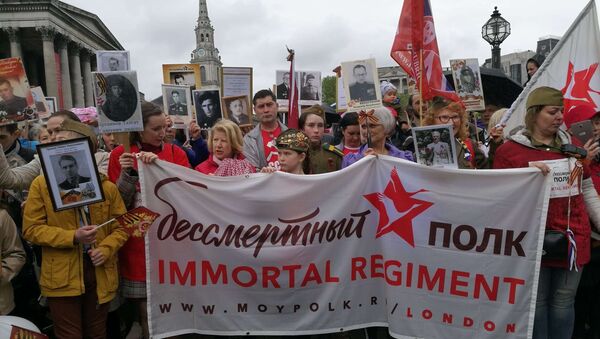 Demond Cureton
All materialsWrite to the author
Attendees held portraits and Soviet paraphernalia as they commemorated the memory of those who had fought in World War II, including "veterans, home front workers, partisans, and members of the Resistance, concentration camps prisoners, Leningrad siege survivors, children of war."

London's Trafalgar Square teemed with nostalgic photos of loved ones who had served and died in World War II, with thousands joining the Immortal Regiment March in London on Thursday at 14:00 GMT.

The march was organised by a non-profit organisation as a non-political, non-governmental and civic initiative created by volunteers, and was open to the general public, irrespective of nationality or political affiliation, according to the event's Facebook page. 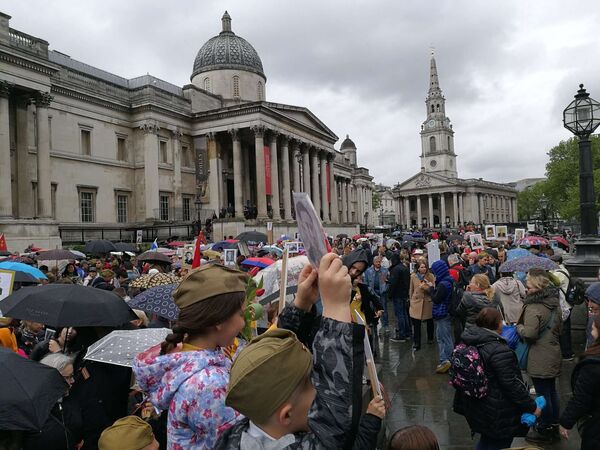 Attendees gathered at London's iconic Trafalgar Square and marched to Westminster Square, shouting "Ura!" and singing classic Russian songs such as 'Kalinka' and 'Katyusha'. Both young and old joined the rally, complete with signs and banners showing the history of the Great Patriotic War to all Londoners.

Attendees Share Their Stories About the Great Patriotic War

Royal Air Force veteran Gareth Fearn, of Surry, attended the Immortal Regiment rally to support his girlfriend, but also said that it was important to commemorate those who served in the Red Army for their sacrifices.

"I attended to support my girlfriend, but also I served in the Royal Air Force," Mr. Fearn said. "I think it's unimportant which country you're from. I think it's important to remember all of those who served in the war regardless of which side they served on."

Highlights of the 9 May Victory Day Parade in Moscow (PHOTOS)
When asked about the significance of Victory Day, he added: "I think it's important to celebrate not just on 9 May, but on every type of Remembrance Day, and I think it's important to continue that from generation to generation, because if we didn't, we'd be living in a very different world. If it wasn't for these people, we'd be living in a different world today.

An attendee of the of the Victory Day march dressed in Soviet Uniform told Sputnik that Remembrance Day was important to remember and held deep meaning for his family.

"It's our Remembrance Day," he said. "My great-grandfather died in this war and it holds a lot of meaning for us. As soon as people forget one war, another will happen after that."

"We deeply respect and are grateful for those who died for our lives," he added.

Mikhail Yuryevich Frolov, the project leader for the Immortal Regiment march, said that Victory Day was one of Russia's greatest celebrations and one of the most important events to remember in Russia's history.

"It's a traditional Victory Day march and Russian speakers from all nations come here to commemorate Victory Day, one of our greatest celebrations," the organiser said.

"For our people, every family has had or knows someone that was involved in World War II, and it is very important event to remember in our history."

A spokesperson from the Russian Culture House in London told Sputnik that the march was significant to remember the world's Russian-speaking heroes and unite the British community in honour of those who gave their lives to liberate the world from Nazism and Fascism.

"This is the 74th anniversary of the great victory against the Nazism and Fascism, and is the fourth consecutive London Regiment event to take place in London," the spokesperson said. "It is significant to commemorate our fallen heroes and liberators, as well as to unite for our Russian compatriots and the Russian-speaking community in the UK, in addition to demonstrating to the local British community about our sense of unity as we pay homage to the fallen."

The Immortal Regiment march began in the Russian City of Tomsk in 2012, where roughly 6,000 attendees held photos of 2,000 WWII veterans. According to the Immortal Regiment's international website, the event's main task is to preserve the memories of past generations that had been lost to the war. The page has catalogued over 400,000 stories to date from families and veterans, and is visited by over 2m visitors from 150 countries across the world, serving as a platform for all nations to revisit and conduct research on the Great Patriotic War. Over 100 cities across the world hold marches alongside Russia to honour the sacrifices of the Soviet Army.