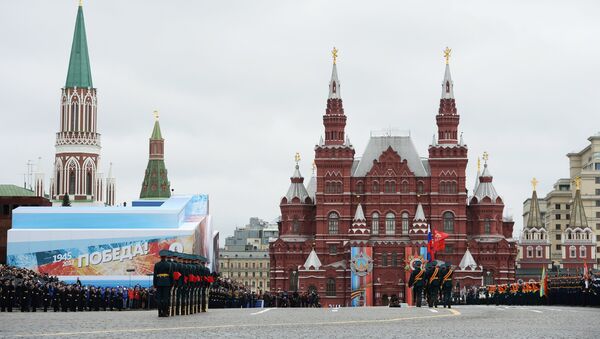 © Sputnik / Alexandr Vilf
/
Go to the photo bank
Subscribe
A number of diplomats, ex-army generals and other dignitaries have paid rich homage to the heroic Soviet people for their sacrifice and contribution to the great victory that signalled the end of World War II. Tributes were also paid to the 87, 000 Indian military personnel who died in action during the six-year-long war.

New Delhi (Sputnik) — "Victory Day", an event marking the 74th Anniversary of the victory over fascism in the Great Patriotic War and the 75th anniversary of the Liberation of Belarus, were celebrated in the Indian capital city of New Delhi with a deep sense of emotion, pride, and solemnity.

At a special function, rich homage was paid by envoys of the Commonwealth of Independent States (CIS), which were once part of the erstwhile Soviet Union, as well as by ex-army generals, political and social leaders to the heroic Soviet people for their sacrifice and contribution to the great victory that signalled the end of World War II and of Nazi rule under German dictator Adolf Hitler.

A major highlight of the programme was a seminar titled "Impact and Lessons of the Great Victory of Soviet People over Fascism for Mankind".

Three photo exhibitions, too, were opened on the occasion: "The Great Patriotic War in Paintings, Graphics and in Human Destiny", "The Times Links (TASS)" and "Cost of the Great Victory". These exhibits were presented by the Embassy of Belarus.

WATCH Over 70 Aircraft Take to the Skies for V-Day Parade Rehearsal in Moscow
Speaking on the occasion, Nikolai Kudashev, ambassador of the Russian Federation to India, said: "The Victory Day has always been and always remained the dearest and most sacred day for every family, for not only our huge country but also for the world itself, a day of national pride and eternal unfailing memory".

The ambassador said it is of "utmost importance to note that we must cherish the memory of the unparalleled courage of everyone on the frontlines and on the home front, of warriors who gave their lives, of all our soldiers and the brave fighters of the second front, of the contribution made by the anti-Hitler coalition countries, of the brotherhood-in-arms of those who stood up against Nazism".

Describing World War II as the most destructive conflict suffered by the mankind, Major General G.D. Bakshi (retired), emphatically lauded the unparalleled courage of the Soviet Red Army which ultimately led to the unconditional surrender of the Nazi forces.

India's immense contribution to that war effort was also recalled.

India was not an independent country at the time, yet its soldiers enlisted in their thousands to help the Allied war effort against Nazi Germany.

Former Vice Chief of Staff of the Indian Army Lt. Gen. Arvinder Singh Lamba (retired) emphasised the extreme care with which Russia wants to see India become self-sufficient and strong in all spheres.

WATCH Russian Defence Minister Shoigu Ride in Kortezh Convertible
India has always been an active participant in Russia's Victory Day Parade, the event assuming great significance in view of the enhanced military ties and the special and privileged strategic partnership between the two countries, Major General Dhruv Katoch (retired), director of the India Foundation, a think-tank based in New Delhi, stated on the occasion.

"Russia's Victory Day Commemoration on 9 May 2019 is thus a good occasion to once again review the strategic defence relationship that exists between the two countries and further strengthen the strong bonds that tie the two nations together", he added.

India has always participated whenever Russia has invited it to such events, Brigadier Rahul Bhonsle, a security and strategic analyst, said on the occasion. "We (India) have a strong military-technical cooperation with Russia. We follow a policy of multilateral alignment in which the ties with Russia will continue to remain strong for another 30, 40, 50 years. Russia will remain the primary player; I have got no doubt about that".

000000
Popular comments
The US wants clearly tu use India against China, to make the wars they need. It is in the hands of India to be open to it, or to against it.
eehnie
8 May 2019, 21:29 GMT1
000000
eehnie, India does what is best for it. If India has to fight China they will but not for US but for protecting itself from overambitious Chinese claims over Indian territory.
Majnu
8 May 2019, 22:29 GMT
000000
Newsfeed
0
New firstOld first
loader
LIVE
Заголовок открываемого материала
Access to the chat has been blocked for violating the rules . You will be able to participate again through:∞. If you do not agree with the blocking, please use the feedback form
The discussion is closed. You can participate in the discussion within 24 hours after the publication of the article.
To participate in the discussion
log in or register
loader
Chats
Заголовок открываемого материала
Worldwide
InternationalEnglishEnglishMundoEspañolSpanish
Europe
DeutschlandDeutschGermanFranceFrançaisFrenchΕλλάδαΕλληνικάGreekItaliaItalianoItalianČeská republikaČeštinaCzechPolskaPolskiPolishСрбиjаСрпскиSerbianLatvijaLatviešuLatvianLietuvaLietuviųLithuanianMoldovaMoldoveneascăMoldavianБеларусьБеларускiBelarusian
Transcaucasia
ԱրմենիաՀայերենArmenianАҧсныАҧсышәалаAbkhazХуссар ИрыстонИронауОssetianსაქართველოქართულიGeorgianAzərbaycanАzərbaycancaAzerbaijani
Middle East
Sputnik عربيArabicArabicTürkiyeTürkçeTurkishSputnik ایرانPersianPersianSputnik افغانستانDariDari
Central Asia
ҚазақстанҚазақ тіліKazakhКыргызстанКыргызчаKyrgyzOʻzbekistonЎзбекчаUzbekТоҷикистонТоҷикӣTajik
East & Southeast Asia
Việt NamTiếng ViệtVietnamese日本日本語Japanese俄罗斯卫星通讯社中文（简体）Chinese (simplified)俄罗斯卫星通讯社中文（繁体）Chinese (traditional)
South America
BrasilPortuguêsPortuguese
NewsfeedBreaking
19:08 GMTElon Musk Ranked Number One as he Surpasses Jeff Bezos on Forbes’ Real Time Billionaires List
19:07 GMTUS Reportedly Didn’t Tell Afghan Army of Plans to Slink Out of Bagram Due to Fear of Taliban Attacks
18:56 GMTSeveral Fireballs Spotted in US Skies – Video
18:53 GMTFrance's Greens Pick EU Parliament Member Jadot as Presidential Candidate
18:51 GMTCould Report on 'CIA Plot' to Kill Assange Help WikiLeaks Founder Evade Extradition to US?
18:44 GMTYouTube Permanently Removes 2 German Accounts of Russia's RT
18:33 GMTNY Gov. Hochul Signs Executive Order to Alleviate Health Care Workforce
18:28 GMTBlah Blah Blah: Greta Thunberg Slams World Leaders at Youth Climate Summit
18:19 GMTAnnapolis Newspaper Shooter Ramos Sentenced to More Than 5 Life Sentences Without Parole
18:19 GMTPsaki: Generals' Advice to Keep 2,500 Troops in Afghanistan 'Not a Long-Standing Recommendation'
18:03 GMT'Not a Stable Man': Ousted Punjab State Chief Slams Congress Party Leader
17:58 GMTTaliban to Temporarily Adopt Constitution of Afghanistan’s Last Monarch
17:43 GMTOver 400,000 Americans Receive COVID-19 Booster Shot During Weekend
17:43 GMTWhat's Behind Erosion of Public Trust in Biden on COVID-19?
17:10 GMTBiden Administration Gives $1Bln Boost to 1,300 Health Clinics Across US
17:00 GMTThe Hague City Council Member Suspected of Plotting to Kill Acting Prime Minister, Report Says
16:53 GMTTrump Called Ex-Press Secretary Grisham to Insist His Penis Wasn't 'Toadstool-Shaped,' Book Claims
16:48 GMT'Sexualised Body': Woman's Statue in Italy Evokes Outrage Over 'Male Chauvinism'
16:28 GMTTaliban Warns of 'Consequences' if US Drones Continue to Violate Afghanistan's Airspace
16:04 GMTCovid Knocks More Than a Dozen F-35s Out of Sky as Lockheed Martin Cuts Production