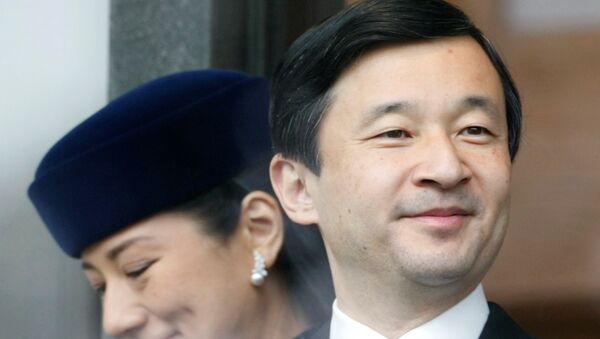 On Tuesday, 85-year-old Emperor Akihito officially abdicated the throne in favour of his 59-year-old son, Naruhito. He has become the first Japanese emperor to voluntarily step down. Prince Naruhito's ascension marks the end of the Heisei era and the beginning of the Reiwa era.

The ceremony was attended by male adult male members of the imperial family, as well as Prime Minister Shinzo Abe, the cabinet ministers and representatives of legislative, judiciary and executive branches. Satsuki Katayama, the minister for regional revitalization and female empowerment, has become the first woman in centuries to witness the ceremony, which is usually off-limits to women. Naruhito's wife and incoming empress Masako and other female members of the royal family were not allowed to attend under the Imperial Household Law.

Japanese Emperor Akihito Officially Abdicates at Imperial Palace in Tokyo
During the ceremony, imperial chamberlains placed the two of the sacred imperial regalia — a sword and a jewel — along state and privy seals in front of the emperor as symbols of his succession. Legends say that the imperial regalia, which also include a mirror now kept in the Grand Shrines of Ise, were handed over by the Shinto sun goddess, Amaterasu, to her grandson Ninigi-no-Mikoto, who is believed to be the ancestor of Japan’s first emperor Jimmu.

Japan's New Emperor Naruhito vowed to carry out his duties as the nation's symbol in accordance with the constitution, expressing hope for the happiness of Japanese people and peace.

"I swear that I will act according to the Constitution and fulfill my responsibility as the symbol of the State and of the unity of the people of Japan, while always turning my thoughts to the people and standing with them. I sincerely pray for the happiness of the people and the further development of the nation as well as the peace of the world," Emperor Naruhito said during his first audience, as quoted by the the Imperial Household Agency.

His remarks were followed by a speech of Japanese Prime Minister Shinzo Abe, who congratulated the people of Japan on the ascension of the new emperor.

"We regard his majesty the Emperor as a symbol of nation and national unity, and amid the turbulent international situation we are determined to create Japan's bright future, which will be full of peace and hope and which we will be proud of, and an era, when culture is born and nurtured with people's hearts beautifully united," Abe said.