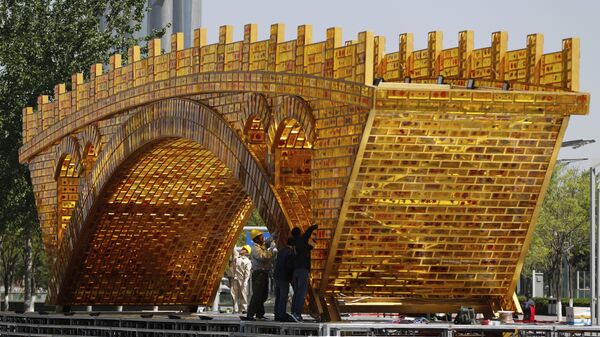 Chinese President Xi Jinping and 37 other heads of state and government, in a joint statement issued after the Second Belt and Road Forum (BRF), sought to reassure the world that the Belt and Road Initiative (BRI) is about partnership rather than the pursuit of unilateral advantage.

New Delhi (Sputnik): China's outreach continues to be viewed sceptically by several pundits, who believe the former is seeking to expand its geopolitical influence at other countries' expense. The communiqué issued after the second BRF pledged to pursue people-centred and sustainable development in line with China's national interests, as well as its international obligations.

India, for the second time, skipped the event in protest against the China-Pakistan Economic Corridor (CPEC), a key component of the Belt and Road that passes through the Pakistani side of Kashmir — which is claimed by India. The corridor connects the Chinese city of Kashgar with Pakistan's Gwadar port on the Arabian Sea.

A portion of Indian scholars focusing on China believe that India can't consider joining the BRI due to the issue of sovereignty.

Beijing's recent moves to address criticism of its ambitiously conceived multi-billion dollar BRI are nothing but the proverbial "old wine in a new bottle", said an Indian scholar on China.

In an interaction with Sputnik, Professor Sujit Dutta, distinguished fellow and editor (National Security) at the Vivekananda International Foundation, a Delhi-based think tank, opined that China's appeal for enhanced global connectivity is unworkable and will come unstuck in the long-run.

Analysing China's reported willingness to take a fresh look at some of the BRI's drawbacks after deliberations at the recently held second forum of the initiative and its desire to change approach for promoting greater global connectivity, Professor Dutta said: "Most of the projects and programmes initiated so far have been done with the expressed aim of advancing Chinese economic, geopolitical, and strategic interests.

Putin Proposes Tying China’s Maritime Silk Road with Russian Northern Sea Route
Asked specifically whether he subscribed to the view that India may have "missed the boat" by refusing to attend the Second Belt and Road Forum (BRF) in Beijing, Professor Dutta said: "No, not at all. We can't join the BRI at all, under no circumstances. I know there are a lot of people who are saying that there is some alternative, new economic system etc. But I don't believe so".

"The moment they (China) made the CPEC (China-Pakistan Economic Corridor) a part of the BRI, it became impossible for India to be a part of that because her sovereignty had been violated. You cannot compromise with sovereignty because of BRI you understand… these projects are Chinese projects, they are not participatory projects. CPEC — China is spending so much money, why? Because it wants to connect its Xinjiang province with the Arabian Sea", he said.

China is also promoting its Maritime Silk Route (MSR) initiative as a proposed oceanic complement to its various overland "Silk Route" projects, which, if successful, could bind countries in the Bay of Bengal and the northern Indian Ocean much closer to its economy.

World
ICRC Says Aims to Ensure Jobs for Countries Located Along China's Belt and Road
Talking about Chinese President Xi Jinping's "open mind" and "conciliatory" tone at the second BRF, which seemed to underline his country's eagerness to course correct and neutralise mounting global criticism of the BRI, Professor Dutta said: "He can have all the open mind he wants, but the ground realities are different. Economically, the interest rates levied by China are very high, ranging between six and nine percent when the accepted global norm is in the one to two percent bracket".

"Do the countries taking help or assistance from China for any of their projects have the capacity to pay back — the answer is no. So when you can't pay back, the Chinese take over the project. Look at Gwadar in Pakistan, leased for 40 years to China; Hambantota in Sri Lanka, 99 years".

READ MORE: Italy Tries to Catch Up With EU Partners by Joining Belt and Road — Analysts

"The principal aim of these projects is focused on infrastructure and power, not only to open up markets and corridors for China, but also to export China's huge building capacities in sectors such as power, steel, and cement, besides other areas".

"We must understand that domestic demand in China is on the decline and the country's companies are already in overcapacity mode. It's a case of transferring their surpluses and losses to the lesser developed countries who need them", Professor Dutta told Sputnik.

China’s BRI Driven by Economic Goals, Not Geopolitical Ambitions - Analysts
Commenting on reports of India and China agreeing to have an informal bilateral summit in October or November this year similar to the Wuhan Summit of May 2018, Professor Dutta said, "Since Wuhan, not much has happened. China can't afford to have another crisis like Doklam, but if we take a larger view of the relationship, we need to ask — have things changed?; has their (China's) position changed?"

"India and China have been having talks and talks since 1991; let me go back, the first talks took place in 1981. Look at the Boundary Question, China has not moved an inch on the Boundary Question; look at the Masood Azhar issue, no movement. Issue after issue, as far as India is concerned, is frozen. There can be as many summits as they want, what are the outcomes? That's important".