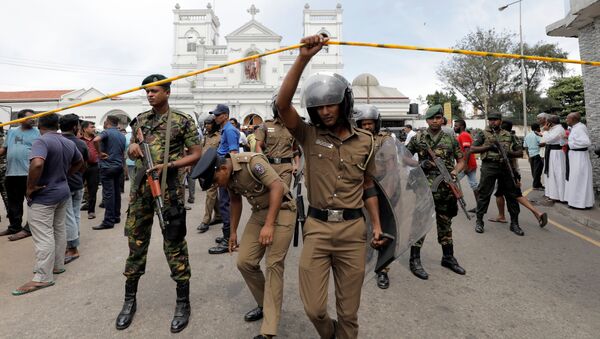 © REUTERS / Dinuka Liyanawatte
Subscribe
India, which also helped Sri Lanka in ending the reign of the militant organisation LTTE about a decade ago, doesn’t intend to send troops out of its own volition and is waiting for a formal request, a media report said.

New Delhi (Sputnik): Amid massive search operations across the island nation and intelligence inputs about the probability of more attacks, Sri Lanka has informally reached out to India urging it to send elite anti-terror commandos for operations as well as to investigate local terror cells, the Indian daily Economic Times reported on Monday.

According to the report, a crack team of counter-terror NSG commandos has been put on standby in the southern city of Chennai following Friday's raids in Sri Lanka, in which 15 people were killed (near the coastal town of Kalmunai in Sri Lanka's Ampara district).

"Considering [the] expertise of NSG in post-blast investigations, we have asked them to be on standby. They will be assisted by their seniors from New Delhi. Over 100 commandos of the counter-terror and counter-hijack squads of the NSG have been based at the hub", the daily wrote, citing a Home Ministry official as saying.

"The final decision to deploy them for assistance in the neighbouring country will be taken by the foreign ministry of the two nations", the official added.

On Sunday, Sri Lanka's Member of the Parliament of D.V. Chanaka Dinushan said in a statement on Twitter that he has received information from security sources about further attacks that will allegedly take place on 28 and 29 April, with the suspects wearing army fatigues and using vans filled with explosions.

​Sri Lanka launched major security operation in several districts after the 21 April blasts, in which at least 253 people were killed and over 500 injured.

The Indian daily also reported that a two-member team from India's Research and Analysis Wing (RAW) and Intelligence Bureau (IB) is in Colombo. Ahead of the Easter Sunday attacks, Sri Lanka was given three warnings about attacks on churches