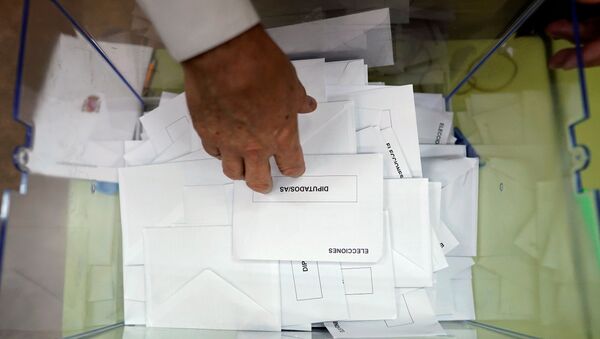 The turnout stood at 60.75 percent two hours before the end of the vote, which is 9.5 percent higher than in the last elections in 2016, when the turnout at the same time was 51.21 percent.

In Catalonia, as many as 64.2 percent of people cast their ballots by 6:00 p.m., which is almost 18 percent more than in 2016, Undersecretary of Spain's Interior Ministry Isabel Goicoechea and State Secretary for Communications Miguel Angel Oliver said at a press conference.

World
Germany's AfD Invited Steve Bannon to Berlin As EU Elections Loom
Preliminary official results of the elections should be announced at around 10:30 p.m. local time.

The opinion polls have showed that the ruling Spanish Socialist Workers' Party is likely come first in the race for the seats in the lower chamber, while it will probably fail to secure the needed absolute majority of 176 mandates.

Spain is holding snap general election on Sunday, in which voters will choose 350 members of the lower chamber of the Spanish parliament and 208 members of its upper chamber out of the total of 266. As many as 36.89 million people, of whom 2 million people reside abroad, are eligible to cast votes.