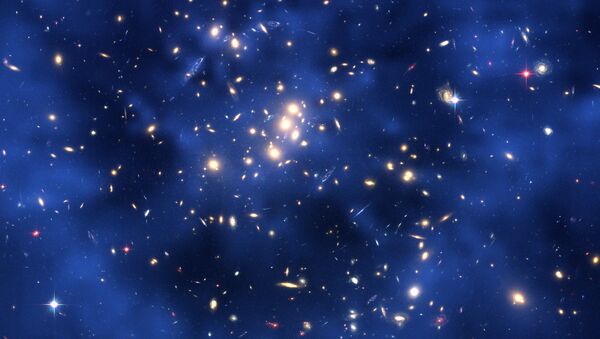 Dark matter detector XENON1T, strategically situated under the Gran Sasso Mountains of Italy, has captured one of the most rare space events: a special type of radioactive decay in xenon-124.

Scientists say the decay of this isotope is extremely slow. Xenon-124 has a half-life of 1.8 x 10 to the power of 22 years – roughly one trillion times longer than the age of the universe, which just shows how remarkable this feat is.

Half-life refers to the amount of time it would take for half of the atomic nuclei in a given sample to spontaneously change through one of the many types of radioactive decay.

A team of researchers managed to observe a special event called a double-electron capture, where two protons within a xenon atom simultaneously absorbed two electrons, resulting in two neutrons – described by the team as "a rare thing multiplied by another rare thing, making it ultra-rare".

But in this case, the sensors designed to observe such interactions captured the decay of the isotope itself, leading to a rare observation of a different sort.

One of the researchers, Ethan Brown from the Rensselaer Polytechnic Institute (RPI) in New York, said it was the longest, slowest process that has ever been directly observed, with their dark matter detector sensitive enough to measure it.

"It's amazing to have witnessed this process, and it says that our detector can measure the rarest thing ever recorded".

READ MORE: Brightside: Astronomers Confirm the Existence of Galaxies With No Dark Matter

Although familiar in theory with its half-life since about 1955, scientists were never able to directly observe the radioactive decay of this xenon isotope. The current event represents direct evidence of something they had been probing for decades.

On the Nature cover this week: Caught in the act. Dark-matter detector captures elusive nuclear decay in xenon. Browse the contents of this issue: https://t.co/MpFLKUu9Av pic.twitter.com/nsA07L0B5L

XENON1T was built to look for dark matter, however, discoveries of this kind are proof that such instruments can lead to other important findings. This latest observation could teach us more about neutrinos — hard-to-detect particles scientists have been hunting for decades.

That, in turn, could help unlock some of the deepest secrets of particle physics.

Curt Breneman from RPI, who wasn't directly involved in the study, said this was a remarkable finding guaranteed to advance the frontiers of knowledge about the fundamental characteristics of matter.