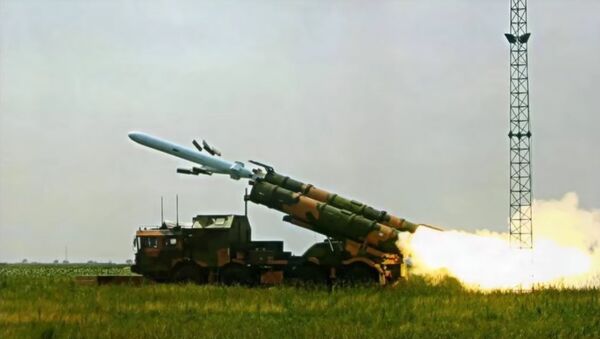 Pakistan's navy has been developing multiple types of missiles designed to target naval and other hostile marine vessels and had conducted live weapons tests on numerous occasions since 2016.

New Delhi (Sputnik): The Pakistan Navy has successfully test fired a domestically-developed anti-ship cruise missile from a fast attack craft in the North Arabian Sea on Tuesday. This was revealed by Inter Services Public Relations (ISPR), the media arm of the Pakistan Armed Forces in a press release.

"The missile accurately hit its target on land, signifying the impressive capabilities of the indigenous missile system. The successful live weapon firing has once again demonstrated the credible firepower of Pakistan Navy and the impeccable level of indigenisation in high-tech weaponry achieved by Pakistan's defence industry," the statement read.

#Pakistan navy tests indigenous cruise missile with with Anti-Ship & Land Attack capabilities (looks like Harba ASCM) from a missile boat. Potential range could be 450-700 Km considering it looks like a sea variant of Babur series. pic.twitter.com/NhEUpdtOVq

​The Vice Chief of the Naval Staff, Vice-admiral Kaleem Shaukat, witnessed the live firing on board a Pakistan Navy ship.

The Pakistan Navy did not specify the fast attack craft used for anti-ship land attack cruise missile testing. Pakistan has been developing an anti-ship missile based on Babur 1B (also designated as Hatf VII), which was last test fired in April 2018.

Since 2016, Pakistan has test-fired a number of new long-range anti-ship cruise missiles (ASCM), most notably the Zarb coastal/land-based ASCM, Harba dual-ASCM and land-attack cruise missile (LACM), and the Babur 1B and Babur Version 2 dual ASCM/LACM. Babur Weapon System-1 (B) incorporates advanced aerodynamics and avionics that can strike targets both at land and sea with a high degree of accuracy and has a range of 700 kilometres. It is a low-flying, terrain-hugging missile, which also has certain stealth features and is capable of carrying various types of warheads.