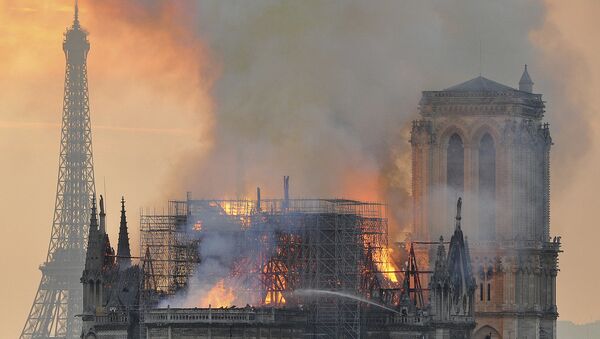 The fire that ravaged the iconic Parisian cathedral broke out on 15 April, devastating the famous landmark; an electrical short-circuit was later named by French authorities as the most likely cause of this tragedy.

As people in France and all over the world take stock of the terrible fire that ravaged the iconic Notre Dame Cathedral in Paris this week, a preacher from Australia has urged the faithful to look at certain passages in the Bible which may take on a whole different meaning in light of the recent events.

In a video he recently uploaded on YouTube, Pastor Steve Cioccolant of the Discover Ministries compared the Parisian tragedy to "waking up to 9/11 but this is for France", and then turned the audience’s attention to the parts of the scripture reminding him of this event.

"They’re saying that ‘our city’s on fire, Paris is on fire, our county is collapsing’, which I think is quite prophetic the way that people are responding", said Cioccolant, then proceeding to quote a passage from the Gospel of Mark containing Jesus’ predictions about the destruction of the Temple of Jerusalem.

He also recited the 19th chapter of the Gospel of Luke, which mentions the prophesized collapse of the Second Temple, and noted that people should keep an eye on the cathedral's reconstruction process.

"We should be now watching how this priceless cathedral gets restored. Is somebody going to propose that, well, ‘we’re secular, we’re humanist, we’re atheist now and we should erect something that is more fitting for France?’" Ciocolant remarked. "In any case, it is a sad day, say day for France".

Also, this week, a French-born rabbi from a West Bank settlement said the blaze that engulfed the cathedral might be a punishment from God as "the first big Talmud burning was in Paris, there in the plaza of the Notre Dame Cathedral".

The devastating fire broke out at the Notre Dame de Paris on Monday, 15 April, causing the collapse of the cathedral's spire and two-thirds of its roof.