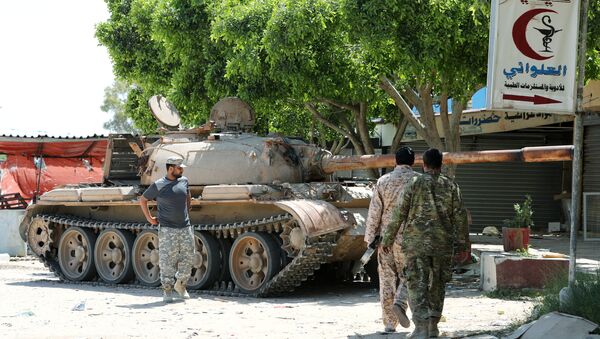 Earlier in the day, it was reported by The Libya Observer that Field Marshal Khalifa Haftar's army had regained control over the Tamanhint Base following the withdrawal of the South Protection Force loyal to the Government of National Accord (GNA).

The Interior Ministry of Libya's internationally-recognized Government of National Accord (GNA) on Thursday accused France of supporting the head of the Libyan National Army (LNA), Marshal Khalifa Haftar, and said it would halt security cooperation with the French authorities.

"The cooperation with the French side on bilateral agreements in the area of security is halted," the ministry said in its Facebook blog.

Libyan GNA Troops Able to Drive Haftar Army Out From Tripoli - Deputy PM
According to the ministry, the decision extends to agreements with France on joint military exercises.

At the same time, the Government of National Accord has issued an arrest warrant for Haftar for allegedly ordering airstrikes against civilian areas. Besides the marshal himself, six Haftar's officers have also been named in the arrest warrant.

"According to Article 1 of the law as of 1999 on the criminal procedure law, we order to detain the following persons and after that to transfer them to the military prosecutor's office," the statement noted.

The new wave of clashes in Libya commenced on 4 April, when Haftar ordered his troops to advance on the Libyan capital to free it from what he called terrorists. As a result, the LNA gained control over the cities of Surman and Garyan located near Tripoli. After the move, the GNA announced a counteroffensive on 7 April, dubbed Volcano of Rage, to confront the LNA.