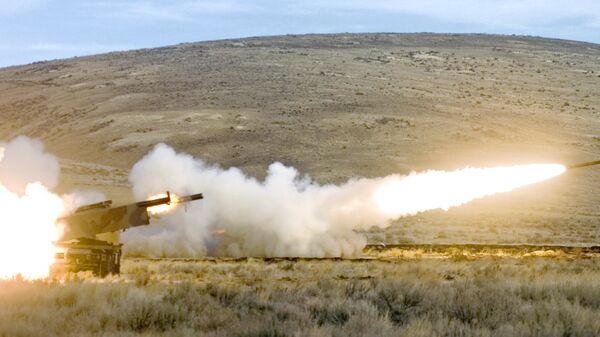 The US Army’s chief laid out a weapons wishlist to reporters Tuesday, noting the service sought to cancel dozens of programs it says are “not as relevant” to current US strategy and requesting new ones better catered to the Pentagon’s primary concern of “inter-state strategic competition” with Russia and China.

During a Tuesday roundtable, US Secretary of the Army Mark Esper told reporters that last year's National Defense Strategy (NDS) had changed the Army's priorities enough for it to make substantial adjustments to its planned weapons programs.

Esper said that vehicles like the Joint Light Tactical Vehicle (JLTV), which was slated to replace the ubiquitous Hummvee, "were, in many ways, designed for a different conflict. It doesn't mean we won't use them in future conflicts, but now my emphasis has to be rebuilding my armor, rebuilding my fighting vehicles, having aircraft that can penetrate Russian and Chinese air defenses and shoot down Russian and Chinese drones and missiles and helicopters and fixed-wing aircraft."

Back in February 2018, the Pentagon's reevaluation of its global strategy concluded in the NDS that "inter-state strategic competition, not terrorism, is now the primary concern in US national security." The Pentagon's Nuclear Posture Review (NPR), released at the same time, described the geopolitical situation as a "return to Great Power competition."

The new disposition has opened the door for the Pentagon to begin a vast new array of weapons programs, including the W76-2, a low-yield nuclear weapon designed to be more politically palatable to use in a conflict, Sputnik reported.

Esper's comments further that development, with the Army chief saying Tuesday that what he needed was heavy weapons such as long-range artillery, attack and reconnaissance aircraft, air and missile defenses and command-and-control networks, Defense One reported.

"What I don't have right now is an attack/reconnaissance aircraft," Esper told reporters. "That's what I need to penetrate Russian or Chinese air defenses. I'm not going to do that with a CH-47" Chinook heavy lift helicopter, which the secretary announced last week would skip its next round of upgrades as part of the cuts. Senior Army leaders slashed a total of 93 programs from the next five years' budgets — that's on top of the 186 programs slashed last year to free up $25 billion for new programs.

At the top of Esper's list is the Long-Range Precision Fires (LRPF) missile, a weapon in development since 2017 that the secretary hopes to use "to hold at bay Chinese ships." Sputnik reported the LRPF is designed to be deployed from the MLRS or HIMARS mobile rocket launch systems and will have "deep strike capability" that can "reach farther than 300 kilometers (186 miles)," according to an Army info sheet.

The LRPF is just one of many weapons under Pentagon development that push the limits of the newly discarded Intermediate Range Nuclear Forces (INF) Treaty. When the US Army released its Fiscal Year 2020 budget last month, numerous land-based weapons with ranges banned by the treaty were found on the books, Sputnik reported, including a cruise missile with a range of roughly 600 miles, which the Pentagon will test in August, and an intermediate-range ballistic missile with a range of between 1,800 and 2,500 miles, which will be test fired in November, Sputnik reported.

Africa
‘Zero Casualties’ No More: US AFRICOM Admits to Killing Civilians in Somalia

Inside Defense reported that the US Army wants to spend $900 million over the next five budget cycles to develop a "mobile medium-range missile" (MMRM) project that will use "non-traditional" acquisition rules to address an "extremely high-risk capability gap."

Defense News notes the MMRM's development is "in response to a need in the Indo-Pacific area of operations to address a medium-range (1,000-kilometer) gap in capability there," which is roughly 620 miles. Details at this point are slim, but the budget documents expect the weapon to be ready by the end of FY 2024.

Incidentally, it was at a Hawaii meeting with US Indo-Pacific Command (INDOPACOM) leadership that Esper spoke of the LRPF's anti-ship value, the results of which the Army chief reviewed with reporters at the Pentagon Tuesday, according to Defense News.

Financial policy analyst Daniel Sankey told Sputnik Wednesday that "the gradual privatization of military equipment and operations over the last 50 years has caused a significant shift in how the US military operates and spends money."

"When private companies get involved, profit becomes prioritized over national security or the responsible handling of public funds," he said. "It is for this reason that we are considering a military conflict with China and Russia, which would be catastrophic for human life on planet earth. However, such a war would be extremely profitable for companies such as Raytheon and Boeing. Additionally, the US government guarantees profits to private military contractors as a percentage. So, for example, they might guarantee a 5 percent profit rate above costs to a private military contractor which only incentivizes the contractor to charge as much overhead as possible."

However, Sankey cautioned not to overstate the power of defense contractors.

"US foreign policy is deeply committed to the preservation and expansion of its empire through the military. This is the backbone of our control over our ‘allies' and essential to their ability to colonize and extract wealth from other countries deemed to be a threat. If private military contractors were not able to further this foreign policy, they would cease receiving their billions of dollars from the State Department. So this relationship benefits both parties, the enrichment of the war makers and the expansion of US empire," Sankey said.