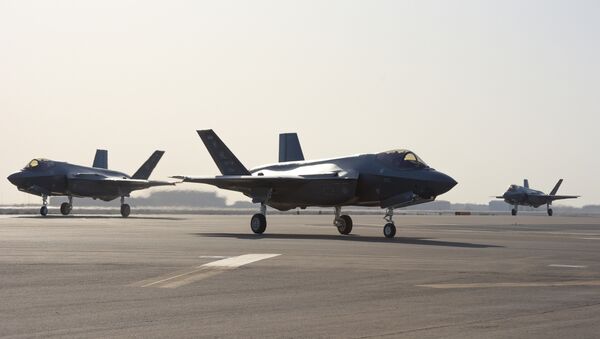 "As the first deployment to the US Air Forces Central Command area of responsibility, crews are prepared and trained for the AFCENT mission," a Monday Air Force statement reads, noting that the jet "provides greater operational capability by combining advanced stealth capabilities with the latest weapons technology."

The F-35A is the conventional takeoff and landing variant version of the jet, and the first of the three versions to enter full service. The F-35B, capable of vertical take-off and landing, has only recently entered service, and the F-35C, which specializes in aircraft carrier operations, has consistently lagged behind in qualifying tests.

However, these aren't the first-ever F-35s to operate in the Middle East: Israel has received a dozen F-35As from maker Lockheed Martin, a specialized version of the aircraft dubbed the F-35I "Adir." Sputnik reported that Israel may have even used its Adirs in combat already, in a strike on Syria last month.

"We are adding a cutting edge weapons system to our arsenal that significantly enhances the capability of the coalition," Lt. Gen. Joseph T. Guastella, US Air Forces Central Command commander, was quoted as saying in the USAF statement. "The sensor fusion and survivability this aircraft provides to the joint force will enhance security and stability across the theater and deter aggressors."

"The F-35A provides our nation air dominance in any threat," said Air Force Chief of Staff Gen. David L. Goldfein. "When it comes to having a ‘quarterback' for the coalition joint force, the inter-operable F-35A is clearly the aircraft for the leadership role."

Military.com noted that role was formerly applied to the F-22 Raptor, another stealth fighter built for the US Air Force by Lockheed Martin. Those fighters returned to their home base at Joint Base Langley-Eustis, Virginia, late last year.

Goldfein has adopted the metaphor of the quarterback, the ball-throwing team leader in American football whose job it is to survey the playing field and direct other players in response to the opponents' moves, to describe the F-35's foreseen role in future conflicts. In a February event at a Washington, DC, think tank, Goldfein said that an F-35 in enemy airspace would "never be alone," instead using its advanced computers to create an integrated picture of the battlefield and "call audibles in real-time," Sputnik reported.

The US has also deployed F-35As to the United Kingdom and Japan since 2017.