Not So Almighty: Why It's Not Up to US to Decide Who Will Act for Caracas at UN 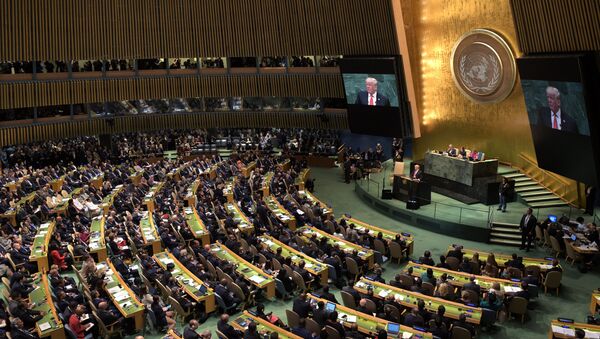 Washington is continuing to push ahead with the Venezuelan regime change effort by trying to boot the Maduro government's delegation out of the UN and urge the international body to recognise self-declared interim President Juan Guaido. However, there are things that are definitely beyond the power of the US.

Vice President Mike Pence's intention to revoke the credentials of Venezuelan Ambassador to the United Nations Samuel Moncada appears to be fuelled by nothing but wishful thinking.

On 10 April, addressing Moncada at the United Nations Security Council on Venezuela, Pence said: "You shouldn't be here. You should return to Venezuela and tell Nicolas Maduro that his time is up. It's time for him to go".

"The time has come for the United Nations to recognise interim President Juan Guaido as the legitimate president of Venezuela and seat his representative in this body", the US vice president said, adding that Washington had prepared a "resolution" on the issue.

In response to Pence's reproach, Moncada emphasised that "the only state representing Venezuela is the Bolivarian Republic of Venezuela", accusing the US of "attempting to pillage [the country's] resources" and spreading false statements about the government of Venezuela.

There are Certain Limits on US Power at UN

While saying that he wants the permanent representative of Venezuela to the UN out of the organisation's headquarters, Vice President Pence apparently forgot that it was beyond the power of Washington to deprive Moncada of his credentials.

Venezuela’s Prisons Minister Warns Maduro Against Officials With US Visas
In fact, the UN has a special body reviewing the legitimacy of the credentials of the permanent representatives, namely, the Credentials Committee.

The body is appointed at the beginning of each regular session of the General Assembly and consists of nine members, who are chosen by the General Assembly on the proposal of the president. In the current session it is Antigua and Barbuda, Chile, China, Finland, Ghana, Palau, the Russian Federation, Sierra Leone, and the United States, with Palau heading the committee.

In case a majority of the committee voted to revoke credentials of Maduro's delegation and replace them with representatives of self-proclaimed interim President Guaido, then the case would be brought to the General Assembly, where a simple majority vote would decide the fate of the delegation.

World
Nebenzia Urges US to Recognise Venezuela’s Right to Be ‘Master of Its Fate’
According to legal opinion by Jared Genser of Perseus Strategies, a Washington, DC-based public interest law firm, a group of UN member states may "bypass the Credentials Committee entirely and to have the question considered as a separate agenda item of the General Assembly, where it would also require a majority vote".

However, if the vote does occur it may set a dangerous precedent of ousting the representatives of "undesired" governments at the request of other UN member states. Previously, the General Assembly dealt up with a similar issue only once, in 2011, when the Credentials Committee deprived Libya's representative Abdel Rahman Shalgam of powers following the toppling of Muammar Gaddafi. However, Shalgam was immediately nominated as a representative of the National Transitional Council of the country at the UN. The General Assembly approved this decision by a majority vote.

Russia Signals It Will Block US Draft Resolution

Meanwhile, the Russian delegation made it clear that it would block the Washington-drafted UN resolution on Venezuela that Vice President Pence was talking about.

"I will tell you definitely that Russia will not support such a move. I know that a lot of others are voicing their opposition, there is a group of countries that were mobilised by Venezuela's friends", Russian First Deputy Permanent Representative to the UN Dmitry Polyanskiy told a press briefing on 11 April.

Havana Slams US Threat to Take Action Against Cuba Over Venezuela as 'Blackmail'
Earlier, on 28 February, Russia, China vetoed a US draft resolution, with South Africa also voting no, calling for placing the blame for the Venezuelan economic crisis on the Maduro government.

Speaking at the 10 April UNSC meeting, Russian Permanent Representative to the UN Vassily Nebenzia called the US effort "just another act in a multi-act drama that attempts to change the regime in Venezuela".

"We reject point blank the US methods for Venezuela", Nebenzia stressed. "One hand of yours holds Venezuela 'by the throat', introducing renewed sanctions and limitations that impede the country's normal development… the other hand 'picks the pockets' of Venezuelans by shamelessly expropriating their assets in Western banks. Since the beginning of this year alone, you have seized over $30 bn of Venezuela's funds and proclaimed that only impostor J. Guaido can manage it".

#Nebenzia: We call upon the #US to recognize after all the right of #Venezuelans and of other nations to be masters of their fate. If you want to ‘make America great again’, then stop interfering in the internal affairs of others. https://t.co/4POQsGjkdL pic.twitter.com/yhnNi3vIDI

​The Russian permanent representative pointed out that if the US wanted to "make America great again", then it should "stop interfering in the internal affairs of others".

The controversy started on 23 January when Juan Guaido, the head of the disempowered National Assembly of Venezuela declared himself an interim president of the country. The move was immediately supported by the US, Canada, Lima Group countries, except Mexico, most of the EU, and some other states. Russia, China, Turkey, Cuba, Nicaragua, and many other states stood up for the legitimate president, Nicolas Maduro.