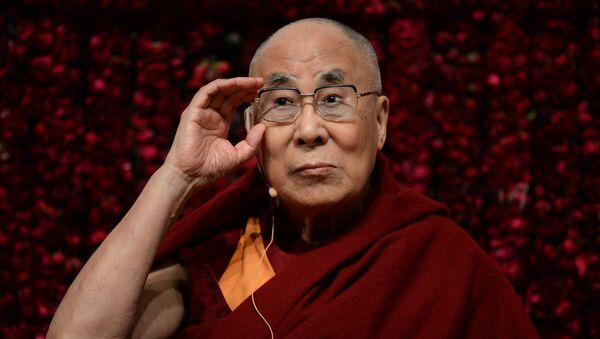 The Nobel Peace Prize winner was rushed back to Delhi and hospitalised for respiratory problems just a day after he had left the city for his abode-in-exile at Dharamshala in the Himalayan foothills. He is reportedly doing okay and is expected to remain in Delhi for a few days.

New Delhi (Sputnik): The spiritual leader of Tibetan Buddhism, Dalai Lama, was discharged from a private hospital in New Delhi on Friday morning where he was admitted three days earlier due to a chest infection, reported AFP news agency.

The 83-year-old Tibetan spiritual leader was admitted to Max Hospital in New Delhi on Tuesday. He had been diagnosed with an infection in his respiratory system. He had returned to his abode at Dharamshala in the state of Himachal Pradesh a day earlier on Monday, and had to be rushed back to Delhi on the next day due to a "light cough", his personal secretary and spokesperson Tenzin Taklha was quoted as saying by media reports.

World
Dalai Lama Hospitalized with Chest Infection - Reports
Speaking to the news agency Taklha stated, "He (Dalai Lama) was discharged from the hospital at 8 o'clock in the morning and is doing very well now".

Apprising AFP of the Dalai Lama's recovery, Taklha said that the spiritual leader was back to his normal routine and was doing some exercises.

The Nobel Peace Prize laureate is expected to remain in New Delhi for some time. He will eventually return to Dharamshala where he has been living in exile for the last six decades after fleeing the Chinese takeover of the Tibetan capital Lhasa in 1959.