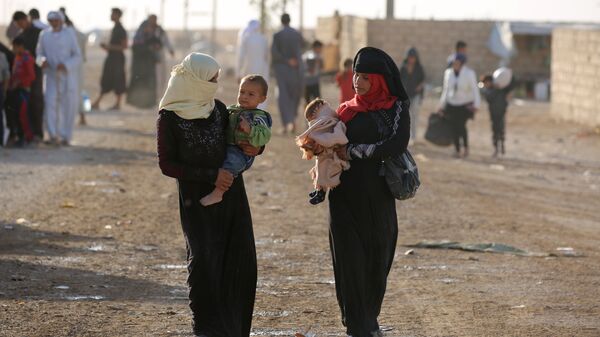 The al-Hawl, also known al-Hol, camp in northeastern Syria was reportedly designed to accommodate 20,000 people, but the population has reached three times the camp's capacity as military operations against the Daesh terrorist group in the Euphrates Valley have intensified.

Maj. Gen. Viktor Kupchishin, head of the the Russian centre for Syrian reconciliation, said Wednesday that at least 235 children have died in the al-Hawl refugee camp in northeastern Syria amid a catastrophic humanitarian crisis.

“Up to 20 people die in the camp every day. Including children. For example, seven children died over the past week due to a shortage of medical supplies, food and inhumane living conditions. The total number of children who have died in al-Hawl camp has increased to 235," Kupchishin said at a daily news briefing, citing a woman who managed to escape the camp, which is located on territory controlled by US-led coalition forces.

UN World Health Organization (WHO) Representative in Syria Elizabeth Hoff told Sputnik last month that the WHO is extremely concerned over the dire humanitarian situation in the overflowing al-Hawl camp. According to the WHO representative, there have been 118 reported deaths in the camp, 60 percent of whom were children under the age of 15.

Red Cross Near and Middle East Regional Director Fabrizio Carboni has described the camp as an apocalyptic scene, with most of its population in poor health after escaping battle lines in Baghouz, the last stronghold of Daesh, which was retaken in late March by Syrian Kurdish forces.

Over 360 Refugees Left Rukban Camp for Damascus-Controlled Area
"Imagine 76,000 people living in a place with no health care. You have a heart attack? You die. You get super sick? You die. I saw five kids surround their mother and watch her slowly die", Carboni said.

The "caliphate" in parts of Syria and Iraq reportedly attracted thousands of foreign fighters who moved there with their wives and children. A thousand men are held in Kurdish custody, while al-Hawl houses thousands of children, with around a thousand of them unaccompanied and at risk of sexual violence, according to Carboni.

Russian Foreign Ministry spokeswoman Maria Zakharova said in March that she was surprised by the "cynical" silence around the situation in the refugee camp.

Russia, Syria Call on US to Disband Rukban Refugee Camp
The al-Hawl refugee camp reportedly accepts people who have fled from Deir ez-Zor, where the international US-led coalition is carrying out attacks not only on militant positions but also civilian targets.

Syria has been mired in a civil war since 2011, with government forces fighting against numerous opposition groups as well as terrorist organizations. The war has resulted in a significant humanitarian crisis in the country, with various international organizations as well as Russia trying to provide civilians with aid.