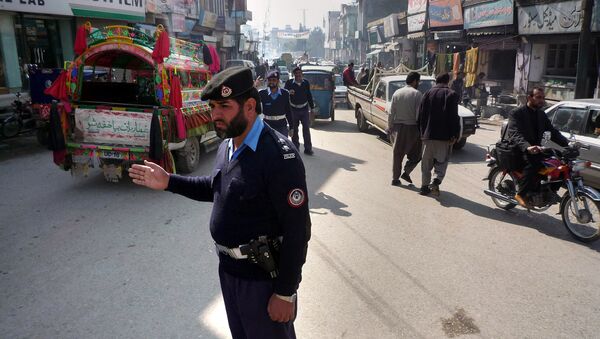 Two Chinese citizens, who according to the police had been running a restaurant in Karachi, remain tight-lipped when police stopped their car and asked them for documents. Policeman suspected that the driver was underage, and the passengers weren't wearing seatbelts.

New Delhi (Sputnik): Amid improving ties and the subsequent increase in the number of Chinese people in Pakistan, a video of Pakistani traffic police stopping two alleged Chinese nationals at a traffic signal in Karachi has gone viral.

In the video, the traffic police can be seen complaining about the huge number of Chinese nationals living in the country, with some running restaurants. The cop was heard saying that the Chinese living in Pakistan often try to evade law enforcement authorities by remaining tight-lipped whenever police stop them for violating rules. They pretend that they cannot communicate in English or Urdu even when they can.

Watch how an underage #Chinese boy & his mother is ignoring the Laws in #Karachi, they’re running a Restaurant in the city but refuse to answer the Traffic Police Officer pretending they don’t understand anything, no documents, no license, no valid registration plate nothing pic.twitter.com/8bvI3oVFev

The policeman added that whenever they stop them and ask them for their driver's licence and other documents, they act like they can't understand what they're being requested to do.

"We keep stopping them for violations and they pretend they don't understand English. Despite knowing both English and Urdu they do not say anything and sit quietly," a police officer said in the recorded video.