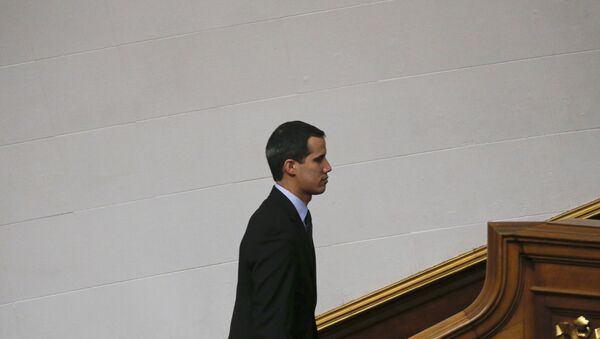 Venezuela's Constituent Assembly has stripped opposition leader Juan Guaidó of immunity and approved a continuation of proceedings against the the self-proclaimed "interim president".

Venezuelan Supreme Court Urges Lawmakers to Strip Guaido's Immunity
The decision paves the way for Guaido's prosecution and possible arrest over the violation of the Constitution when he declared himself interim president.

"The National Constituent Assembly of Venezuela allows the continuation of a judicial investigation against Juan Guaido", the adopted document said.

The vote was broadcast live by local television channels.

During the meeting, the deputies called for the creation of people's courts to try those who follow the instructions of the United States and for the confiscation of their property. They also called Guaido's actions a crime against humanity.

In response to the move, Juan Guaido said that he will continue working despite the decision of the Constituent National Assembly.

"In any case, we will not turn from our path… Tomorrow we have a working day, we will continue to act and talk to the Venezuelan people," Guaido said addressing his supporters.

US Activist Suspects 'No One Showing Up' for Pro-Guaido Protests in Venezuela
The Constituent National Assembly approved the continuation of proceedings against the opposition leader. At the same time, the final decision did not shed light on whether Guaido would be deprived of parliamentary immunity amid the investigation.

"Why did they change the wording of the decree? Because they are scared," Guaido said referring to the absence of the provision on revocation of his parliamentary impunity in the document of the Constituent Assembly.

Venezuela has been dealing with an acute political crisis. On 5 January Guaido was elected the head of the opposition-controlled National Assembly that all other government branches have been refusing to recognise since 2016. Two days after the Venezuelan Supreme Court annulled his election, Guaidó declared himself the country's "interim president". Venezuelan President Maduro, who won the May 2018 election and was sworn in for his second presidential term on 10 January, said that Guaidó's move was an attempt to stage a coup orchestrated by Washington.

Almost immediately after Guaidó proclaimed himself "interim president", he was supported by the United States and some 50 of its allies. China, Russia, and Bolivia among other states, have expressed their support for constitutionally elected Maduro as the only legitimate president of Venezuela.