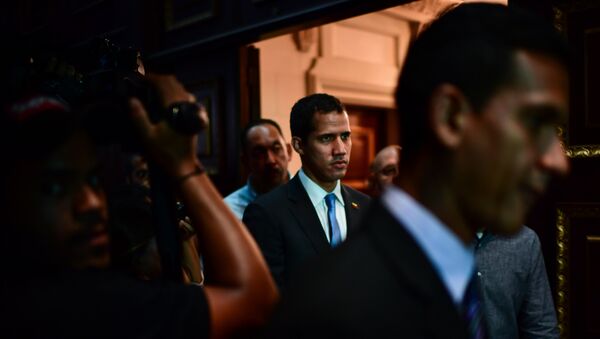 "[The court] orders to hand a certified copy of this decision to the head of the national Constituent Assembly in order to recall the parliamentary immunity of Juan Gerardo Guaido Marquez," Supreme Court Justice Maikel Moreno said.

The announcement of the court decision was aired by local television broadcasters.

US Activist Suspects 'No One Showing Up' for Pro-Guaido Protests in Venezuela
The court also confirmed the ban for the opposition leader to leave the country without a permission and found him guilty of contempt for the government.

"The court had previously banned Guaido from traveling abroad without the permission of the court. It is well known that he violated this ban," the court ruling read.

Moreover, the court confirmed its previous decision on blocking of Guaido's bank accounts and other financial tools on the Venezuelan territory.

Venezuela has been facing an acute political crisis since January 5, when Guaido was elected the head of the opposition-controlled National Assembly, which all other government branches have been refusing to recognize since 2016. On January 23, two days after the Venezuelan Supreme Court annulled his election, Guaido declared himself the country's "interim president." Venezuelan President Maduro, who was sworn in for his second presidential term on January 10 after winning the May election, which part of the opposition boycotted, qualified Guaido's move as an attempt to stage a coup orchestrated by Washington.

The United States immediately recognized Guaido, after which some 50 other countries followed suit. Russia, China, Cuba, Bolivia and a number of other states have, in the meantime, voiced their support for the legitimate government under Maduro. Mexico and Uruguay have refused to recognize Guaido, instead declaring themselves neutral and promoting crisis settlement via dialogue.