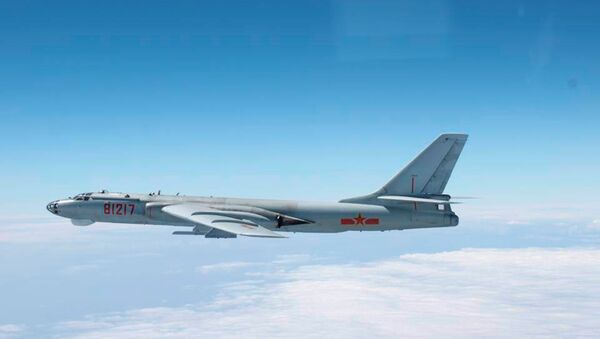 According to a report by the Japanese Ministry of Defense, Japanese airspace was not violated by the Chinese aircraft. However, the event marks the second JASDF interception of Chinese military aircraft over the East China Sea since March 30, when China flew four Xian H-6K long-range bombers, one Shaanxi Y-9JB electronic countermeasures aircraft, one Tupolev Tu-154MD electronic intelligence plane and at least two fighter jets over the Miyako Strait, The Diplomat reported.

The Miyako Strait is a waterway between Japan's Miyako and Okinawa Islands, and is geopolitically important because it is one of the only waterways that allows China's PLA Navy access to the Pacific Ocean from the East China Sea. The PLA Navy also frequently uses the strait to conduct military exercises.

Tensions between Tokyo and Beijing increased after China announced the installation of an air defense zone over the East China Sea in November 2013. The zone covers the uninhabited Senkaku Islands (which China calls the Diaoyu Islands), whose ownership is disputed by the two countries.

After the Second World War, the islands, which are located next to important shipping routes, as well as potentially large oil and gas fields, were controlled by the United States until Washington returned them to Japan in 1972. However, China insists that Tokyo maintains control over the islands illegally.

Last October, the Japanese government revealed its plans to construct a Japanese military base on Ishigaki Island in the East China Sea to "deter Beijing's military activity" in the waters, according to a report by Japan's Sankei Shimbun newspaper at the time.