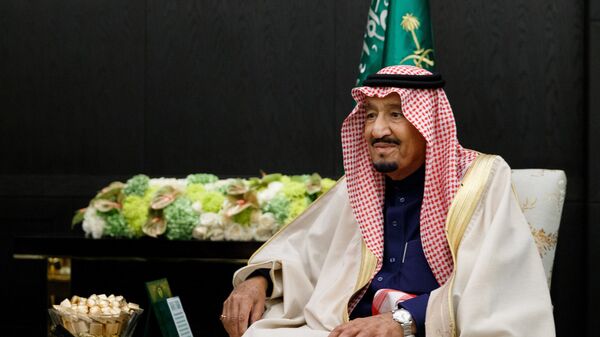 © Photo : Russian Defense Ministry
/
Go to the mediabank
Subscribe
International
India
Africa
Saudi Arabia, as well as the UN and EU states, recently denounced the decision of US President Donald Trump to recognise Israeli sovereignty over the Golan Heights, which are part of Syria's Quneitra province according to international law.

Saudi King Salman has condemned Trump's move to back up Tel Aviv's claim to the Golan, stressing that the kingdom "absolutely rejects" any measure that would deny Syrian sovereignty over the territory.

Addressing the Arab League in Tunis, he once again reiterated the country's position on other disputed territories, such as the Gaza Strip and East Jerusalem, voicing his support for the establishment of a Palestinian state.

The same stance has been expressed by the Tunisian president, who underlined that the summit should convey the importance of establishing a Palestinian state in order to achieve regional stability.

READ MORE: The Golan Heights: Are They Gone From Syria for Good?

The US Decision to Recognise Israeli Sovereignty Over the Golan Heights

US to Redraw Maps to Include Golan Heights as Part of Israel - Report
Previously, Saudi Arabia's Foreign Minister Ibrahim Al-Assaf expressed the country's position on the Golan Heights, rejecting the US decision to recognise Israeli sovereignty. The area was seized by Israel from Syria during the 1967 Six-Day War and formally annexed in 1981.

The countries participating in the Arab League summit unanimously denounced the US move, stressing that it contradicts international law and reflecting a statement issued by the European Union on 27 March. Last year, the UN General Assembly adopted a resolution calling on Israel to immediately withdraw its forces from the occupied area after the country organised local elections there on 30 October  2018.

READ MORE: Lebanon Alarmed Over Its Own Lands After Trump's Move on Golan Heights — Report

The Golan Heights have been under Israel's control since the country seized the territory during the 1967 Six-Day War. While Israel adopted a law to annex the territory in 1981, the United Nations declared the move void, without any legal effects.