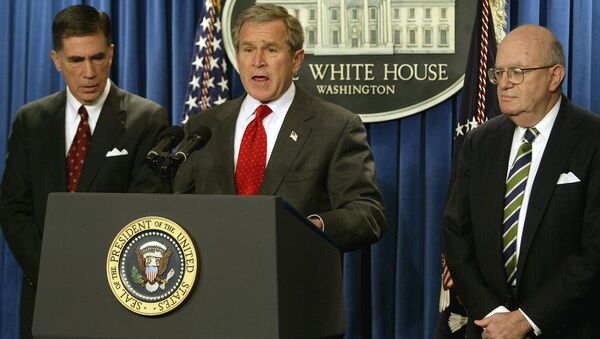 Neil Clark
All materials
Sixteen years on from the start of the illegal US-led invasion of Iraq, further evidence has emerged that the war was planned long before the attack took place and that the stated reason for it, ie 'Iraqi Weapons of Mass Destruction' was bogus.

Speaking before the Commons Constitutional Affairs Committee this week, the former head of the Royal Navy, Admiral The Lord West of Spithead, revealed that he was told in June 2002, 'that we would be invading Iraq with America at the beginning of the following year'.

"It was quite clear that the Government were thinking we have to get Parliament and others on side. But what was interesting was that as it developed, there was all this stuff on weapons of mass destruction and everything, and it did seem to me that people were looking for a casus belli that they could discuss in Parliament," Lord West said.

Bush and Blair and their acolytes repeatedly said that the Iraqi leader Saddam Hussein could prevent war by admitting he had WMDs and disarming. As late as 25th February 2003, Blair was saying that 'even now' Saddam could avoid war by 'accepting the UN route to disarmament' 'I do not want war', he told the House of Commons. 'I do not believe anyone in this House wants war. But disarmament peacefully can only happen with Saddam's active co-operation."

READ MORE: 16 Years Later, Legacy of US War in Iraq is Destruction, Lies, Not ‘Misjudgment'

But it's clear that whatever Saddam did, he and his country were going to be hit with Shock and Awe. The whole charade of weapons inspectors, sent in to search for weapons that were not there, was designed to try and convince people that war was a last resort and not the first option.

Crucially, the invasion had to come before the weapons inspectors finished their job and gave Iraq a clean bill of health- as then the pretext for war would have gone.

Admiral West's revelations, which follow on from similar comments he made in  2016, are not the only ones we've had from Inside the Tent figures about what was really going on in 2002/3.

In his memoir My Life, Our Times, published in November 2017, Gordon Brown, the Chancellor of the Exchequer in 2003, admitted that the Iraq War was 'not justified'. He also said 'we were all misled on the existence of WMDs'. According to Brown, a key US intelligence report which not only refuted the claim that Iraq was producing WMDs,  but also their 'current ability to do so', was not seen by the British government. An attempt to pass the buck? You make your own mind up.

Earlier, the former British Ambassador to Washington, Sir Christopher Meyer, said that President Bush had first asked Tony Blair for his support in a war against Iraq at a private White House dinner just nine days after the 9-11 terror attacks, which had absolutely nothing to do with Iraq.

We also know from the Chilcot Inquiry that on 28th July 2002, Tony Blair sent Bush a memo in which he pledged 'I will be with you, whatever'. He went on: 'the military part of this is hazardous but I will concentrate mainly on the political context for success'.

That involved trying to 'encapsulate our casus belli in some defining way', with weapons inspections the chosen route. ' If he (Saddam) did say yes, we continue the build-up and we send teams over and the moment he obstructs, we say: he's back to his games. That's it. In any event, he would probably screw it up and not meet the deadline, and if he came forward after the deadline, we would just refuse to deal."

As for timing, Blair says 'we could start building up after the break. A strike date could be Jan/Feb next year'.

Blair continued to scare us witless right up to the launch of the invasion in March 2003 about Saddam's deadly arsenal. A critical claim, contained in the so-called 'September Dossier', was the one that Iraq possessed chemical weapons which could be assembled and launched within 45 minutes.

This led to the infamous 'Brits 45 minutes from Doom' headline in Rupert Murdoch's Sun and similarly terrifying headlines in other newspapers. Yet in 2004, Blair said that he had not realised before the war that the alleged weapons were not missiles but only battlefield munitions.

Former Foreign Secretary Robin Cook wrote in the Guardian ': 'I was astonished by his reply as I had been briefed that Saddam's weapons were only battlefield ones and I could not conceive that the prime minister had been given a different version.'

In July 2003 a Foreign Affairs committee report declared "We conclude that the 45 minutes claim did not warrant the prominence given to it in the dossier, because it was based on intelligence from a single, uncorroborated source."

It is clear that the Iraq War was a plan hatched by neocon extremists in Washington and lurid claims of Iraqi WMDs, which did not exist, were made to justify it.

The Nuremberg Judgement of the trial of the WW2 Nazi leaders stated: '"War is essentially an evil thing. Its consequences are not confined to the belligerent states alone, but affect the whole world. To initiate a war of aggression, therefore, is not only an international crime; it is the supreme international crime differing only from other war crimes in that it contains within itself the accumulated evil of the whole.".

The Iraq War was clearly a war of aggression, and as such, an example of 'the supreme international crime', yet, sixteen years on, no one has been held accountable for it.  That's in spite of over 1m people losing their lives following the invasion and the war greatly increasing the threat from terrorist groups. Even Tony Blair himself has conceded there were 'elements of truth' in the claims that the Iraq War led to the rise of Daesh/IS.

Worse still, the war on Iraq was followed by more aggression against Libya, in 2011, and Syria, wars which like the invasion of Iraq, have helped provoke a refugee crisis of Biblical proportions. Let's go back to 27th January 1998, more than three and a half years before 9-11.   It was on that date that a letter was sent to President Clinton, on behalf of the neoconservative 'Project for a New American Century'. The letter called for 'removing Saddam Hussein and his regime from power. That now has to be the aim of American foreign policy'.

Among the signatories to the call to arms were Elliot Abrams and John Bolton. Abrams is now the US special envoy to Venezuela- and seeking regime change in Caracas, while Bolton is President Trump's National Security Advisor and warning us about Iran's 'nuclear weapons program'.

It's as if the Iraq War never happened.

000000
Popular comments
Anglo elites are experts at lying -- a common skill for most sociopaths. It's the same situation with the Skripals-Novichok Saga.
Kt
29 March 2019, 16:41 GMT4
000000
Romo, Anglo elites defend/serve/pander to only their own interests. The rest of the voting sheeple be dammed -- just pay your fines and taxes and vote for whoever the MSM channels tell you to. And stop asking questions and commenting on non-MSM sites.
Kt
30 March 2019, 05:48 GMT2
000000
Newsfeed
0
New firstOld first
loader
LIVE
Заголовок открываемого материала
Access to the chat has been blocked for violating the rules . You will be able to participate again through:∞. If you do not agree with the blocking, please use the feedback form
The discussion is closed. You can participate in the discussion within 24 hours after the publication of the article.
To participate in the discussion
log in or register
loader
Chats
Заголовок открываемого материала
Worldwide
InternationalEnglishEnglishMundoEspañolSpanish
Europe
DeutschlandDeutschGermanFranceFrançaisFrenchΕλλάδαΕλληνικάGreekItaliaItalianoItalianČeská republikaČeštinaCzechPolskaPolskiPolishСрбиjаСрпскиSerbianLatvijaLatviešuLatvianLietuvaLietuviųLithuanianMoldovaMoldoveneascăMoldavianБеларусьБеларускiBelarusian
Transcaucasia
ԱրմենիաՀայերենArmenianАҧсныАҧсышәалаAbkhazХуссар ИрыстонИронауОssetianსაქართველოქართულიGeorgianAzərbaycanАzərbaycancaAzerbaijani
Middle East
Sputnik عربيArabicArabicTürkiyeTürkçeTurkishSputnik ایرانPersianPersianSputnik افغانستانDariDari
Central Asia
ҚазақстанҚазақ тіліKazakhКыргызстанКыргызчаKyrgyzOʻzbekistonЎзбекчаUzbekТоҷикистонТоҷикӣTajik
East & Southeast Asia
Việt NamTiếng ViệtVietnamese日本日本語Japanese中国中文Chinese
South America
BrasilPortuguêsPortuguese
NewsfeedBreaking
06:36 GMTThird of Swedish Police in Blighted Areas Have Mental Issues – Survey
06:27 GMTFormer US Defence Chief Mark Esper Sues Pentagon for 'Blocking' Parts of His Memoir
06:09 GMTPriti Patel to Hold Talks on Migration Crisis With European Ministers Despite French Snub
06:00 GMTKnow-How: Who Actually Made Scythian 'Gold'
05:59 GMTDenmark Bans Influencers From Advertising Cosmetic Surgery, Sugar Dating to Minors
05:51 GMTUK Convenes Urgent G7 Ministerial Meeting Over COVID Variant Omicron as WHO Urges Not to Panic
05:07 GMTMass Killer Breivik Sending Letters to Survivors With Excerpts From His Manifesto
04:47 GMTCOVID-19 Live Updates: Japan to Ban Travellers From Entering to Prevent Spread of Omicron Variant
03:46 GMTVideo: Jacksonville Jaguars Mascot Risks it All in Failed Stunt, Still Unable to Bring Luck to Team
03:39 GMTGOP Lawmaker Says Biden’s Social Spending Plan Would Allow IRS to 'Spy' on Americans
02:53 GMTMaduro Calls EU Observers at Latest Venezuelan Elections ‘Delegation of Spies’
02:43 GMT'Keep Livin': Matthew McConaughey Decides Not to Run for Texas Governor
02:36 GMTOver 2,000 People Protest Against COVID-19 Measures in Prague - Reports
02:19 GMT'French Trump' & Possible Presidential Candidate Zemmour Spotted Showing Middle Finger to Protester
01:28 GMTMarket Bull Expects US Fed to Raise Rates Six Times By 2024 Due to High Inflation
00:24 GMTRepublican Rep. Says Congress Leadership 'Needs to Change' as GOP Could Secure Southern Border
YesterdayFauci Tells Biden It Will Take 2 Weeks to Have Full Information on Omicron Strain
Yesterday‘Absolute Hubris’: Rand Paul Slams Fauci For Saying 'I Represent Science'
YesterdayRoger Stone Calls FBI 'Biden's Personal Gestapo' While Speaking of Jan. 6 Committee Subpoena
YesterdayJennifer Lopez Feels Her Reunion With Ben Affleck Is 'Truly Meant To Be,' Report Says